Ella Redmond and Nicole Thomson have been awarded the Jean Mary Anderson Award in Plant Science for 2021. Both Ella and Nicole work on different parts of a large project on breeding a "non-heading" ryegrass - i.e. ryegrass that does not flower and produce seeds under normal field conditions, and therefore will produce more leaves, which means more fodder for animal nutrition. 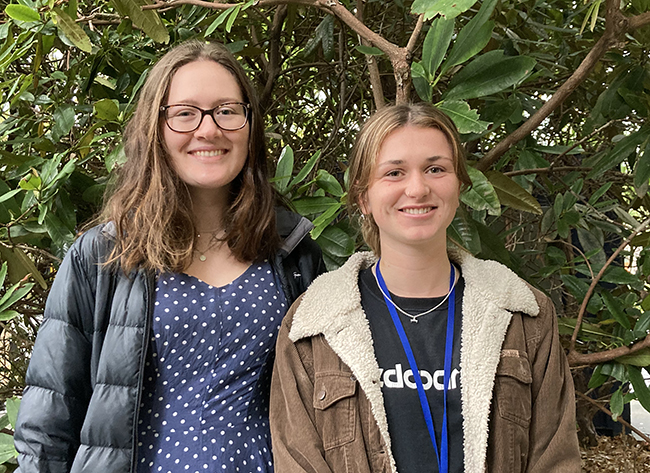 Ella (right) is studying for an MSc in Plant Biotechnology under the supervision of Dr Lynette Brownfield, and her part of the project is to identify the gene or genes that are preventing flowering in a significant proportion of plants in a newly developed commercial ryegrass cultivar.

Ella says: "I grew up in Chch and have always been a huge fan out of the outdoors - being in the ocean, the snow and tramping. So naturally I've always been an advocate for the environment as well - and obviously our generation is also very much aware that things need to change within our lifetimes for the earth to survive past the current climate problems."

Ella came to university loving science but unsure of what she really wanted to do - "just because we're not introduced to what is out there in high school". She loved biochemistry, then became fascinated with genetics and was introduced to plant science through both of these subjects. When she realised that plant science will be critical to mitigating climate change and feeding a growing population, she knew what she wanted to do.

A summer internship with Barenbrug Agriseeds showed her that independent companies within the agricultural industry, those whose main focus is monetary, can also be aware of environmental concerns and passionate about the primary sector's need to become more sustainable. This made her realise that while working for the agriculture industry and wanting to live in a more sustainable world might seem mutually exclusive aims, a career in agriculture research can actually allow her to be a part of the change. The Barenbrug internship led into her Master's project, in collaboration with the same company. "I'm really excited going forward as there is so much cool stuff going on in plant science and huge potential for major global breakthroughs - which is just so exciting to watch and understand and maybe be a part of too."

Nicole (left) is doing a BSc(Hons) in Genetics, with Professor Richard Macknight. She is approaching the problem from two directions. Firstly she is aiming to set up and optimise the CRISPR-Cas technique in ryegrass, providing a tool for the research team as a whole. Secondly she will be looking at the gene expression levels induced by different promoters (short regions of a gene that are the "switch" to turn it on and off).

Nicole says "I grew up in Taranaki, getting the best of both worlds with both rural and urban living, and I was inspired with a love of gardening and science." When she moved to Dunedin in 2018, Nicole was eager to dive into the full University experience, and began her degree as a chemistry major. After taking the 100-level plant biology paper as an interest paper, Nicole fell in love with plant genetics, breeding and biotechnology, so she ended up graduating with a double major in Genetics and Plant Biotechnology. She says "Applied plant research provides solutions to many of the issues we face today, such as famine, nutrition and environmental issues, and has the potential to improve many people's lives."  A summer studentship in Richard Macknight’s lab cloning and comparing gene expression confirmed her desire for a career in plant development and research.