In what may well be a first in Otago’s 142 year history - Tupe Tagomoa-Isara (PGDipTour 2008; MTour, 2011) graduated late last year at the University of South Pacific in Apia, Samoa.

Having completed her Masters on the subject of Tourism Recovery after the 2009 Tsunami in Samoa, Tupe’s degree went through the Otago ceremony in early-December and her certificate was then couriered to Samoa, allowing her to graduate there with family and friends.

On September 29 2010 an 8.3 magnitude earthquake off of the southern coast of Samoa generated massive tsunami waves resulting in severe devastation for many villages and contamination of coastal areas. The disaster greatly impacted the tourism infrastructure, economy, environment, water quality and psychological aspect of the residents in the affected areas.

The objective of Tupe’s thesis was to examine the recovery of tourism after the tsunami with specific emphasis on exploring the immediate impacts tourism businesses suffered from the tsunami, identifying the emergency responses that occurred in the aftermath, explaining the issues and challenges arising from the recovery process and examining the strategies and opportunities that tourism operators and relevant organisations are using to recover tourism in the district. An examination of the preparedness programmes for future disasters was also part of the mix.

Four tourism businesses that were affected in the Safata district were selected for this research. 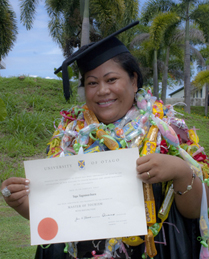 Tupe believes hers is the first tourism study carried out on tourism recovery after the 2009 tsunami and specifically a study which presents a tourism case study from the Safata district. Her findings will provide an insight on the issues facing the tourism businesses hoping to recover, as well as determining their preparedness programs and disaster plans for future events.

Results show that there was no disaster plan for the tourism industry before the tsunami.

The tsunami has caused severe damage to tourism businesses – such as premises being demolished, equipment destruction, psychological effects and environmental damage. Results also show the rapid response of the local communities, government and overseas agencies.

It was also clear that although the affected tourism businesses did not have any disaster plans before the tsunami, they showed willingness to develop and become proactive in implementing a plan as a means of preparing for future disasters and mitigating their effects.