From Bottles to Big Business 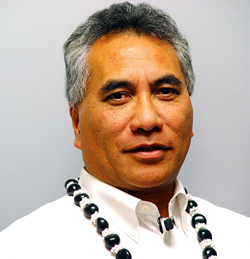 Entrepreneurship started early for Ulu (Uluomato’otua) Aiono (BSc, Computer Science 1981, MBA 8 1984) who was made an Officer of the New Zealand Order of Merit for services to business in the 2012 New Year’s Honours.

Now a millionaire and the founder of the hugely successful software technologies company COGITA in 1983, Ulu’s passion for doing things differently started with collecting empty Coke bottles and selling them to the local dairy as a six-year-old.

Born in Samoa, Ulu came to New Zealand in 1960 in search of opportunity and set up home in Epsom. And that’s where is started.

"We lived opposite Alexandra Park racecourse. They had trotting club races on Saturday nights sometimes, so my brother and I would get up at five on a Sunday morning, jump the gates and collect all the Coca-Cola and Fanta bottles we could find," Ulu says.

"Late after church on Sunday, we'd go to the dairy and sell them. My brother and I lived like princes because of that."

COGITA is an international high-technology enterprise, which specialises in resource planning software for blue-chip manufacturing and distribution companies. It is the world's top selling agent for Epicor software, based in the United States, and has annual sales in the tens of millions. There are offices throughout Australia and the company also owns software assets in the United States.

As well as being well-known in business, Ulu is a respected face and business leader within Auckland’s Pacific Island community. He was the first person of Samoan descent to complete an MBA at Otago University and is the first Samoan to start a high-technology enterprise in New Zealand.

His company sponsors the Inspiration Award for the annual Prime Minister's Pacific Youth Awards, which was set up two years ago in a bid to encourage high achievers to continue to seek the heights. Ulu is the chairman of the Pacific Island Chamber of Commerce and the National Pacific Radio Trust, and is a member of the Auckland Regional Economic Development Forum and the Auckland University of Technology Council.