KlickEx Founder a Graduate to Watch Out For 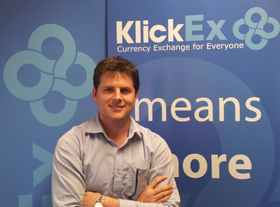 An Otago Business School graduate was recently named a top US innovator in banking/finance for 2013.

Robert Bell, founder and Managing Director of KlickEx was named by Bank Innovation Magazine in their list of “2013 Innovators to Watch: 44 Executives Shaping the Future of Banking.”

This adds to a stellar year for Robert, one which also includes being named one of the top 10 fintech innovations of 2013 (ranked by SWIFT), being ranked the number one mobile phone international payments service in Asia by the UN and World Bank, and being named the New Zealand Hi-Tech Young Achiever of the Year (for the second time).

KlickEx was also voted most likely to succeed: New Mobile Tech Firm at the Silicon Valley Product Launch Conference, 2012, and won the title ‘world’s best payments initiative’ at the Financial World Innovation Awards in London in 2011, on top of the University of Auckland’s Entrepreneur’s Challenge in the same year.

Robert says the best part of the accolades is proving it could be done.

“My best friend Brett and I designed the system and wrote the software mostly because the world said it couldn't be done. We proved it in the South Pacific, our own home market, with some early help from industry titans, like Ross Peat (former Managing Director of Microsoft NZ), Terry Allen, and Phil Norman (former Chairman of Xero, and the NZ Venture Capital Association). Now we’re really gaining global momentum.”

KlickEx (including PassportFX) is a regulated clearing service for Central and Commercial Banks, with a retail add-on. Connecting international and domestic mobile, commerce, health, government and NGO operations it provides compliance and full banking/market transparency to regulators and low cost services to consumers.

Robert has a BA in Economics and Politics (Economies of Innovation and Trade) and a BCom in Finance and Quantitative Analysis (Financial Markets) from the University of Otago, and attended the Graduate Financial Engineering program at Stanford in the US.

He says KlickEx is going great.

“In June this year we merged KlickEx and the US corporate version “PassportFX” to create one global business. We completely restructured the NZ company for growth, and have since added retail services in Europe, the US, and are launching wholesale into Asia this year.

“At the beginning of this year we had less than 15,000 registered users, but by mid-year, more than 30,000 people had signed up, and by September, we expect to be almost 75,000 strong, most of them monthly or weekly users.

“To keep up with global demand, we have now had to look for some help. Following our restructure, we completed most of what appears to be an eight figure plus “seed” round, with investors coming from Asia, the US, and Europe, including large banks, well known VC (venture capital) firms, and technology companies. We even had to turn down some funding.

“With that now in place, we can fully focus on powering up our global change program based on this backing, and the proof of concept we demonstrated in our humble little South Pacific pilot – it’s all very exciting for a couple of farm boys from the Wairarapa and Warkworth – it just goes to show what can be done!”