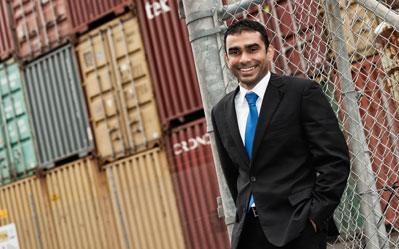 Pramuk Perera is a doctoral researcher in International Business at the University of Otago. He investigates the influence of the New Zealand-China Free Trade Agreement (NZCFTA) on the international business of firms based in New Zealand. He recently had an opinion piece published in The National Business Review. The article is reproduced below.

International trade contributes nearly two-thirds of New Zealand's economic activities. Trade relationships are significant for the wellbeing of the country, which must find the balance among trade, politics and allies.

The crisis in Ukraine challenged New Zealand to demonstrate its balance.

Issues in Ukraine are not clear and are hard to understand. But they resulted in the suspension of negotiations for a trade deal with Russia and its custom union partners Kazakhstan and Belarus in a year that marks 70 years of diplomatic relations.

The UN was helpless in imposing sanctions against Russia as it is a permanent member of the Security Council. The UN needs unanimous support from all the permanent members to impose sanctions.

Meanwhile, New Zealand was quick to get together with the US, the EU, Canada and Australia to impose travel sanctions against certain individuals in Russia.

Foreign Minister Murray McCully says these sanctions are "symbolic." When Australia threatened Russia with comprehensive sanctions, ambassador Vladimir Morozov stated "any restrictive measures of the Australian government will inevitably have a boomerang effect on Australian exporters."

In an ideal situation, countries may separate trade and politics but those always interact and interfere.

Perhaps a key objective of New Zealand's foreign policy is gaining the membership of the UN Security Council. That may require strong recognition of the UN charter by New Zealand.

In addition, the defence agreements signed in 2012 between New Zealand, the UN and the US may have further pressurised New Zealand to go with the pattern. In other words take collective actions with the "like minded" countries.

New Zealand would like to represent a more neutral approach in the UN but the recent incident shows New Zealand became a part of the pattern generated and led by the US and EU. This may go against New Zealand's positioning of independent foreign policy.

New Zealand began negotiations for a trade deal with Russia and its customs union in November 2010. Though there was a good progress in negotiations, Trade Minister Tim Groser returned in March from Moscow indicating the pause in talks was temporary.

In 2013, merchandise trade between New Zealand and the Russian custom union was more than $820 million. During past five years, trade has increased more than 100%.

Imports from Russia were over $590 million and exports were over $230 million. Imports and exports have grown 204% and 23% respectively during the past half a decade.

New Zealand mainly imports fuel from Russia, while key exports consist of dairy, meat and fish. Russia was the 23rd largest trading partner of New Zealand in 2013.There are not much services trade and investments between the countries.

It is an ideal fit for New Zealand exports. Most importantly, Russia is a key emerging economy. Out of BRIC, New Zealand has China already on board and negotiations with India.

The Ukraine situation creates doubts about future New Zealand-Russia trade and challenges the need to have key emerging economies on board.

In addition, Russia may not be an easy market to deal with. New Zealand exporters may find it difficult to adapt to Russian business practices.

A trade agreement will help look into these areas at the governmental level to increase the safety and legitimacy of business ties.

However, trade agreement will not solve all the problems. New Zealand and the Russian Custom Union were negotiating a comprehensive deal. In addition to trade in goods, the agreement considers trade in services, investment, people movement, intellectual property rights, institutional issues, dispute settlement and other issues such as government procurement and environment.

It is clear New Zealand is focusing more toward Asia Pacific for its future trade. All the trade agreements are with Asia Pacific countries. Many of these countries did not show any aggression toward Russia over its handling of the Ukraine issue. Perhaps they are giving little bit of time to see the developments or to find a middle path.

Allies may also be useful in difficult situations such as the EU's attempt to rebuild the economies of Portugal, Italy, Greece and Spain. In that context having allies is beneficial. If New Zealand manages to complete a well designed Trans-Pacific Partnership, then its members may receive a similar bargaining power in terms of international trade such as or even above the EU's.

However, nations may have to compromise national policies to satisfy its partners. They may also need to be involved in activities that are not directly relevant to their country's interest but to some influential allies' interests.

New Zealand's involvement in both world wars and the deployment of New Zealand forces in Afghanistan are examples of allied actions.

Also, allies can change their interest. The UK's shift of focus from the Commonwealth to the EU created negative consequences for countries such as New Zealand.

In this globalised world, almost all the countries find it hard to reach a balance among national interests, international business and international relations.