Values learned at Otago took Babbage around the world 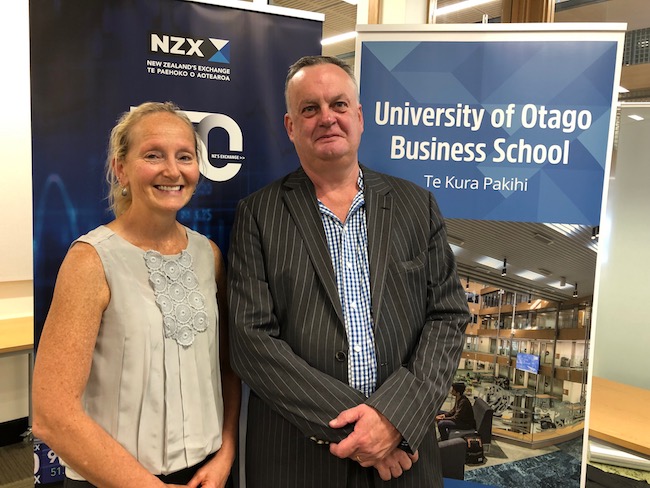 Doctor Helen Roberts and Nigel Babbage after the public lecture

“I had a bit of luck”, is how he described his business experience during a public discussion and question and answer session at the Otago Business School recently.

Mr Babbage, a University of Otago alumnus, was appointed as a director of NZX in December 2017 and was in Dunedin last week for the NZX’s 150th celebrations.

In what was his first speech in 14 years, Mr Babbage shared his journey from Castle Street to Wall Street with students, university staff and local business people.

He has spent more than 30 years working in financial and capital markets locally and globally. He previously held executive roles with British Petroleum (now BP) and Citibank, managing the New York currency derivatives desk, and worked for BNP Paribas, where he took on the joint role of Global Head of Currency Derivatives Trading and Head of North American Foreign Exchange. He served on the Foreign Exchange Committee of the Federal Reserve Bank of New York for three years.

He graduated from the University of Otago in 1984 with a double degree (BCom and BSC Honours).

Mr Babbage was at pains to “not to come across as any better than anyone else”.

“I’m not better or smarter than anyone else. I just really, really wanted it.

“I just seemed to be in the right place at the right time. But I’ve had lots of failures and losses too. I could tell you about losing stories all day.

“And it’s the failures which got me where I am today.”

He urged those gathered to learn from their failures, and never give up. 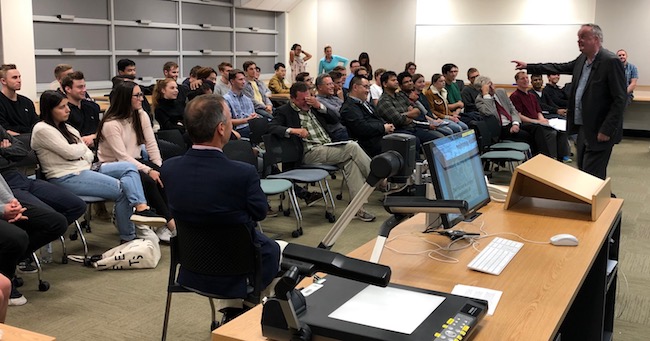 Nigel Babbage has the audience laughing during his public lecture

“Just because something doesn’t go your way to start with, don’t think that’s the end of the story.

“I was angry and anyone who knows me knows I’m not an angry person. But then I got over it and I worked hard. I worked really hard, I wanted it more than anyone else and I turned it all around.”

The five years he spent at the University of Otago, living on Castle St, were the best of his life, he says.

“Those five years set me up for life. What I learned in my years here held me in pretty good stead. I learned things about life from my lecturers and from being a student of Otago that you can’t learn in a lecture theatre alone.”

When asked what qualities Mr Babbage looked for when interviewing new staff, he did not hesitate with his answer.

“Differentiate yourself. You could be one of 100 A+ grads. Obviously marks are great, but have something in your CV that’s different, that shows you have passion. Whether you’re a great sportsman or volunteer or whatever, do something that makes you stick out from the other 99.”

And despite prodding from the audience, Mr Babbage vowed there was no secret formula to his success.

“I’m not [messing with] you guys. The values I learned at Otago are what helped me; work hard, be honest, believe in yourself.”