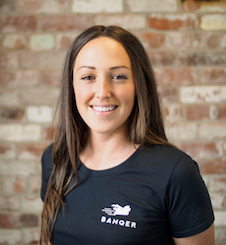 The University of Otago ignited a life-long love of learning for this year’s Young New Zealander of the Year, Kendall Flutey.

Kendall (28), graduated from Otago with a Bachelor of Commerce in 2011, a graduate diploma in accounting in 2012, and the Master of Entrepreneurship in 2013.

This year she won the Kiwibank Young New Zealander of the Year; the second consecutive year an Otago Master of Entrepreneurship alumni has won the prestigious award. David Cameron won the title in 2018 for his work with the company he co-founded, Learn Coach.

Kendall says prior to studying at Otago she felt like she engaged in learning because she had to, rather than wanted to.

“But during my studies at Otago I was able to learn broadly, at my own pace, and on my own terms. As a result, the academic path I took was atypical but I was able to extend myself rather than needing to follow the norm, or a prescribed timetable.

“I’m really grateful that Otago supported my academic growth through allowing me the flexibility to do things a little differently, and remain excited and engaged in learning I was genuinely passionate about.”

While her studies initially took her to an accounting career, she soon found her passion as the creator and co-founder of Banqer, an online educational program that helps young New Zealanders develop financial literacy skills.

“I actually first studied economics, then accounting and then entrepreneurship. I didn’t so much see it as a change of direction, perhaps more of an accumulation of knowledge—with economics and accounting being my foundation,” she says.

“Entrepreneurship is a hyper-practical thing, so I’m really glad I went into my studies of it with at least a little more perspective on things.”

Kendall found the inspiration for Banqer, and the opportunity to use technology for financial education, when her little brother kept asking questions about money.

The program is now used by more than 70,000 school children in New Zealand and Australia. It targets year-2 to year-8 pupils and explores income, expenses and budgeting, as they manage their fictitious incomes to cover expenses.

Kendall admits she always “exhibited entrepreneurial tendencies”—she was told off when she 7-years-old for selling class newsletters to her peers for 20c each—but completing the Master of Entrepreneurship cemented that passion.

“The best part … was exposing me to some awesome people in the space who I could learn from.”

And that memory reflects her time at Otago.

“Like most Otago alumni, I have an abundance of tales to tell from my time studying in Dunedin. So much happened during my time there, with my favourite memories centering around the people whom I share those memories with,” she says.

While Otago ignited Kendall’s passion for learning, her success since cannot be attributed to just one person, she says.

“Individual awards never only belong to the individual they’re bestowed to. The individual is just the tip of the iceberg.

“What you don’t see are the family and friends keeping them loved, fed, and sane. You don’t see the teachers or professors that have inspired and influenced, or the bosses and colleagues that helped craft skills and ambitions.

“So I’d say the list of who I owe my success to is pretty long.”

It is not the awards, however, of which Kendall is most proud; it’s “making a small difference in the lives of Kiwi kids".

“I’m lucky in that my work really is a passion. It does consume a lot of my time, and offers me a lot of opportunities I wouldn’t otherwise have.

“It’s a complicated passion which weaves its way through the rest of my life too. Other passions of minimalism, self-sufficiency and financial independence would stem from this—they’re all interrelated.”

Kendall has one tip for future Otago students.

“The number one piece of advice I like to put out there for students is to broaden your definition of success. Once you do this, you’ll open up more options for yourself to really thrive and succeed.”