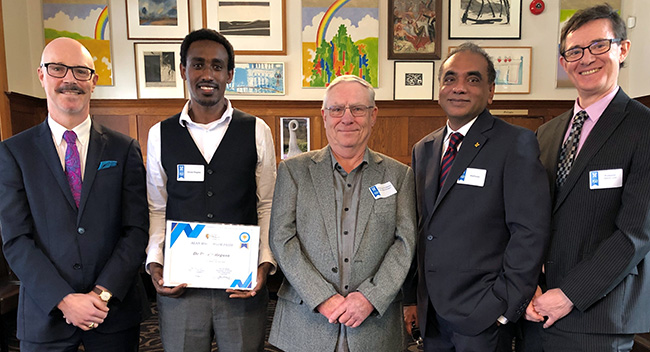 Eleven years ago, graduating with a PhD, Dr Thiruven Madhavan decided he wanted to leave something for the University of Otago that would remain when he was gone.

He also wanted to make sure his PhD supervisor and mentor, Emeritus Professor Alan Macgregor, would be remembered and recognised, and he wanted to make life a little easier for the students who would follow in his footsteps and undertake a PhD in the Department of Accountancy and Finance.

So, in 2008 he donated a generous sum of money to the department to be used for prizes for PhD students, in the name of Emeritus Professor MacGregor. The $1000 prize is awarded each year – if a suitable candidate is identified.

Last week, Dr Madhavan, now an entrepreneur based in Sydney, came back to Otago to catch up with his former mentor, and to award the Alan MacGregor Prize to this year’s recipient, Dr Dereje Regasa.

At the ceremony, Dr Madhavan said Otago and Emeritus Professor MacGregor are both “very special” to him.

“I wanted to leave something that stays with Otago even when we are all gone, and it was important to do something for Alan and to make sure his name continues to always resonate across Chambers.”

This was the first time Dr Madhavan has attended one of the award ceremonies. Several of the past recipients were present also.

“This has meant so much, so much that I’ll come back next year and try to figure out what to do next. I’ve had the opportunity many times to do something like this, but I picked Otago.”

Emeritus Professor MacGregor also attended the ceremony this year for the first time and recalls mixed feelings when told of the scholarship 11 years ago.

“It was very humbling, but the overwhelming feeling was one of surprise. Lots of people did the work, but I got the recognition,” he laughs.

This year’s recipient, Dr Regasa, has just completed his PhD on Finance and Economic Development in Ethiopia, supervised by Dr Helen Roberts.

Accountancy and Finance Head of Department Professor David Lont describes Emeritus Professor MacGregor as a “living legend” and says the scholarship is a prestigious one.

“Those of us who had the chance to have someone of Alan’s calibre as a supervisor or mentor all know that we are very blessed and it was wonderful of Madhavan to create this award around his retirement.”