Graduation bittersweet after loss and challenges 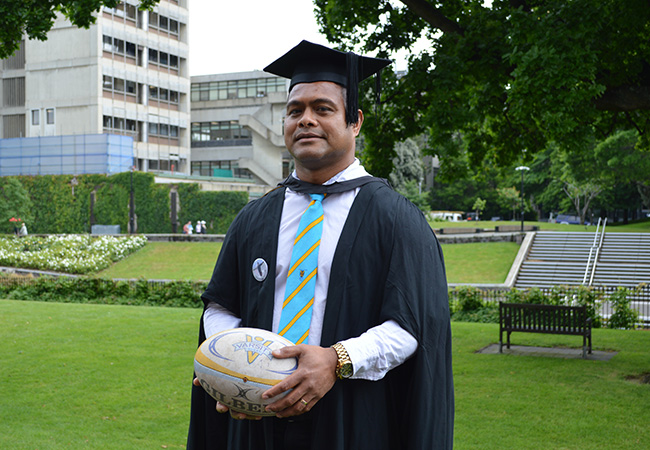 Graduation was a time to reflect and celebrate for Jekope Maiono on Saturday.

The man who began the rebuild of his Fijian village after three devastating cyclones graduated with a Master of Sustainable Business from the University of Otago on Saturday.

Originally from Vatulele, on the island of Cikobia, Jekope Maiono had the support of the village, his wife and two sons, his Elim Church family, and wider Dunedin community behind him when he walked across the stage.

But there was someone very important missing – Mr Maiono’s daughter, Annabella, who died suddenly from an aneurism in July this year, aged 13.

The bittersweet nature of the graduation is something the 40-year-old accepts.

“There were triggers, for sure. It wasn’t an easy day.”

But, it also hasn’t been an easy three years, he concedes.

As well as the tragic passing of his daughter and the responsibility of securing the economic future of his home village, his youngest son last year required heart surgery in Starship Hospital due to complications from pneumonia. He has also balanced his study with full time work and has helped develop a sevens rugby competition in Dunedin.

Mr Maiono moved from Fiji to Lawrence in 2006, when he was 27. He played rugby for the town, started working at Tuapeka Gold Print – where he still works 13 years later - and for three years was travelling to and from Dunedin to attend University where he was studying a Bachelor of Commerce.

After graduating with his BCom in 2017, he returned to Vatulele for his mother’s funeral. The village had been hit by three cyclones which had destroyed infrastructure, including the wharf on which the village relied for large boats to dock when bringing supplies.

“While I was there I got asked by the village elders to try to help with finding ways to bring some economic sustainability to the village.”

Despite not living there for the past 18 years, Mr Maiono says declining the request was never an option.

“That land is my identity. It is who I am and I will return there one day.

“I had knowledge that my elders asked me to utilise and that’s what I did. I came back to Dunedin and I started the process.”

That process included setting up an official relationship with the Ministry of Youth and Development, in Fiji, finding other people with the skills to assist with the project, setting up a bank account, and building a social media presence.

Within a year, the group had raised enough money in grants to build a shed to store the equipment needed to rebuild the wharf.

Mr Maiono led the build in December last year, leaving for the island as his son was recovering from his heart surgery.

“The Fiji project was in place so I had to go, but it wasn’t easy leaving,” he says.

Nor was readjusting to the culture.

“I was used to a modern way of living. I had to be careful because it was really two different worlds. No wharf meant materials for the shed had to be transferred from a big boat to a small boat and brought ashore.

“But it wasn’t just that side of things. We had to build a shed within four weeks. I was paying the village people and having to tell your uncle he had to be at work on time wasn’t easy. That’s not how things are done.”

A year on, the focus is on raising the funds and gathering the expertise needed to rebuild the wharf.

Back in Dunedin, Mr Maiono has undertaken construction of a different kind, since 2013. While he played hooker for Lawrence, Pirates then University of Otago Premiers, Otago B and Otago Country, he was dismayed to find there was no sevens competition.

“So I got in contact with the Otago rugby union to see about developing one,” he says.

He did, and this year’s tournament attracted 12 teams.

His standing in the rugby community and the church was never more obvious than when his daughter died; hundreds of messages of comfort and support flowed in to the family, fundraisers were held and strangers mourned with the family.

“Rugby doesn’t discriminate, it’s universal, and that’s the best thing about rugby. And the rugby community in Dunedin is just awesome.

“Nothing compares to how the rugby and church community came together and supported us. It was really touching. I realised there are really genuine people who really do care and notice what we do.”

In 2020 and beyond, Mr Maiono says his focus will continue to be on rebuilding Vatulele.

“That’s the most satisfying part for me.”