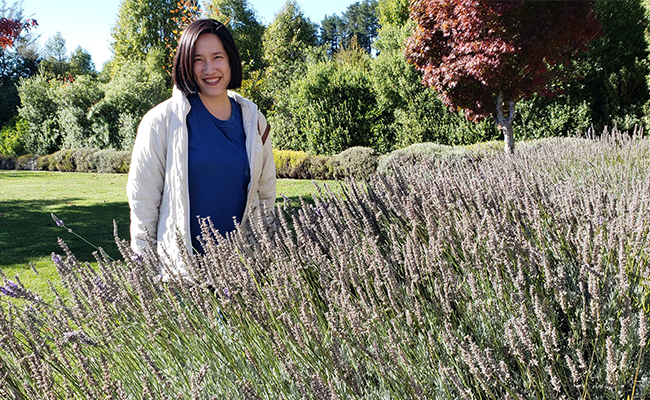 Otago Business School graduate Rasa Salakij shares what sparked her curiosity for programming as well as her advice for future students.

Originally from Thailand, Rasa Salakiji worked as a graphic designer for an IT company before falling in love with New Zealand’s flora and fauna and moving here with her family.

“In my previous job, I interacted a great deal with programmers which made me curious about the field but I never had a chance to explore this due to work and life commitments at the time,” Rasa says.

“However, when my family and I moved to New Zealand for a fresh start, I decided to take the idea more seriously.”

After taking a few online courses, she came across the Diploma for Graduates (ICT) at the University of Otago Business School.

Initially, Rasa was daunted by taking classes with peers who were around 10 to 15 years younger than herself, but she quicky realised that this was no barrier to her learning success and instead found it “enjoyable to learn new, modern technologies as a mature adult.”

She is now working as a junior software engineer at ADInstruments and mentions that she found the academic staff at the University very approachable and helpful.

“After completing undergraduate and postgraduate studies in Thailand and Japan, I feel comfortable saying that the staff at the University of Otago were genuinely very helpful; it’s a Kiwi thing,” Rasa says.

She felt like there was always someone who could explain complicated concepts to her or point her in the right direction.

As someone who was just starting her programming career, Rasa had so many questions she required answers for.

Here, Rasa felt she had access to experts, including lab demonstrators and teaching fellows, who could help her as much and as often as she needed it.

She encourages future students to explore several subjects that interest them because they might come across something they initially had not considered and that, on reflection, Rasa learned plenty of useful skills when she was pushed out of her comfort zone.

“Nothing was easy for me personally and I often had to remember to be kind to myself,” Rasa says.

“Looking back on it, my study life wasn’t the most glamourous or exciting. I just worked hard to learn as much as possible and along the way made some good friends and enjoyed the breaks.

“It’s the simple and little things that makes the university experience most meaningful though.”