The brand personality of rocks 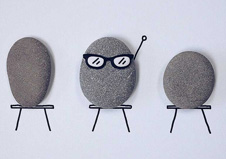 A critical evaluation of a brand personality scale

Can rocks be assigned personalities, and what does this mean – for the rock and for the methods currently being used by marketers?

The advertising and marketing industries use several techniques that rate commercial product and services according to their perceived ‘personality’ traits.

University of Otago marketing researcher Shelagh Ferguson, along with Mark Avis from Massey University and Sarah Forbes from the University of Birmingham, UK, have been researching “brand personality”, or the “set of human characteristics associated with a brand.

Their study showed it is possible the methodology used widely in research – in this case the Aaker’s brand personality scale - actually creates the perceptions of personality that it is trying to measure.

The researchers asked New Zealand students to apply personality traits to three different types of rocks in a picture, giving them 42 traits, 15 facets and five factors to choose from. Rocks were the chosen stimuli, as they do not have any obvious commonalities with brands.

Participants largely agreed on each rock’s traits - rock G was the most glamorous and the most contemporary, rock H was the most sentimental, and rock I was the most independent.

While assigning personality to an innate object seems ridiculous, Dr Ferguson says the study fulfilled its purpose by clearly showing 'personality' can be ascribed to almost anything. This in turn draws attention to how marketing experts use and misuse brand personality techniques.

“We deliberately set out to show the ludicrousness of a ‘brand personality’ measure - just because informants may be able to attribute human like personality traits to brands, it does not mean that this is how they ordinarily think about brands.”

The research was globally acknowledged, winning the 2016 Ig Nobel economics prize. The annual Ig Nobel prizes seek at first to make people laugh, and then make them think, celebrating the unusual, honouring the imaginative and spurring people’s interest in science, medicine, and technology.

• Rock one was variously described as “a big New York type businessman, rich, smooth, maybe a little shady” and “carries a black brief case, slick hair, quick thinker and quicker talker. Not a good dude though.”
• The second rock was described by one student as “a gypsy or a traveller, a hippie” and by another as “liberal, attractive and female, I saw a young person, maybe mid-30s, who was very attractive when she was younger/possibly a model. Has her own way of thinking, with a somewhat grounded confidence, enjoys organic food.”
• The third rock was called “modest”, “farm mechanic” and “down-to-earth”, “perhaps living on the Otago Peninsula and keeping chickens.”