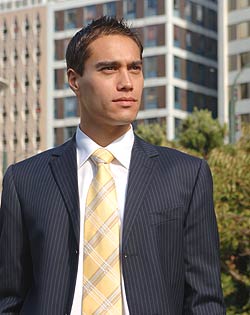 For Koro Dickinson, studying at Otago was the best place to lay the foundations for a fascinating career.

"I wouldn't have chosen to study anywhere else," he says. "The quality of the teaching and the degree itself is up there with the best and can speak for itself anywhere in the world!"

His first degree, a Bachelor of Commerce, was completed at Otago in 2001 and included a semester of study at Iowa State University in the USA. Koro went on to graduate from Otago in 2004 with First Class Honours in Political Science. "The people I met at Otago are now my best friends."

Koro worked at the Ministry of Foreign Affairs and Trade (MFAT) for over 10 years as a Foreign Policy Advisor. He began in the Economic Division as the OECD (Organisation for Economic Cooperation and Development) coordinator, liaising with various government departments and agencies in Wellington. He also kept in daily contact with the New Zealand delegation to the OECD based at their embassy in Paris.

Among other things, Koro worked behind the scenes on New Zealand's economic modelling study on the potential benefits of a Free Trade Agreement (FTA) with China. "My politics and marketing degrees have given me a good insight into their application into the real world and I am now using this knowledge in dealing with economic problems in a political environment."

During his time with MFAT Koro was posted to Canberra and Ottawa in Canada.

Koro's experience with MFAT have provided the range of knowledge and experience required for his current role as International Relations Specialist with the Auckland Council.