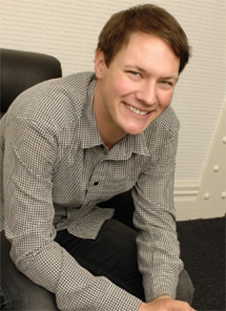 Tim Nixon has had a colourful career since completing the Master of Entrepreneurship. First, he set up an innovative computer games company called Straylight Studios Ltd, and now he heads up Runaway, the computer games division of Natural History New Zealand, the Dunedin-based maker of scientific documentaries. Tim initially completed a BA in Design at the University of Otago and while he had the personal attributes to be a successful entrepreneur he felt he needed further tools to draw upon to be able to commercialise his product ideas. He graduated with a Master of Entrepreneurship in 2005.

He strongly believes that while New Zealanders are inventive people, they often lack the capacity to follow through to a profitable outcome. "The MEntr gave me a great foundation in business operations and entrepreneurial strategy." As an owner/operator it gave him the breadth of skills and knowledge required even if the organisation ends up outsourcing parts of its operations such as Accounting. "It still helps to be able to speak the same language," claims Tim. He believes that the programme is "really cool" and it enables students to stay dynamic especially through the use of case studies.

The single most enjoyable component of the course for Tim was the simulation workshop where students had to manage a real-life business. It really inspired Tim and led him to believe in the concept of meaningful play through its participative nature. He wanted to work in an environment where he could push the field forward to a wider audience not just traditional gamers. Time management was the biggest challenge while studying. Tim was highly occupied as a half-time designer as well as running a business, so fitting in studies was not easy. However, being able to manage competing demands has proven extremely useful in his endeavours as both a student and an innovator.