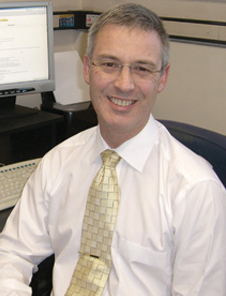 Dr John Fountain is a Medical Toxicologist at the National Poisons Centre in Dunedin. He is medically trained, and after doing further training in a hospital setting, joined the New Zealand Army as a Medical Ofﬁcer and served time in Iraq after the First Gulf War, seconded to the United Nations. There he developed a greater interest in Toxicology, after being involved in the destruction of Saddam Hussein's chemical weapon arsenal.

The Centre maintains a very large database of poisons (and the treatment of poisons) called TOXINZ. This is an extremely valuable resource for GPs, other health professionals and emergency services when dealing with patients who have come into contact with toxic substances. John's roles include the maintenance of the quality of the responses provided by staff who answer calls about the treatment of affected patients and to manage the comprehensive on-line database.

John joined the University of Otago's Master of Entrepreneurship (MEntr) programme with a view to researching the commercial potential of the TOXINZ database. This became the topic of his project in which he looked to develop a business case for the venture.

John believes, "The MEntr programme has provided me with a more formal range of tools to do that." Examining ﬁnance options and undertaking market research are just two tools that he is using to assess the viability of the venture.

John found that one of the best aspects of the course was to be taught by staff that not only have the academic credentials but, "the practical, hands-on background in start-up ventures and advising others in such."

As well as that, he found that it was "energising" to be in class with experienced, enthusiastic and like-minded people. John believes that "the best way to learn is to do," and that the programme gives the framework to do that as well as assess risk. It is noteworthy that this is the sixth degree or Postgraduate Diploma in which John has enrolled and he regards it as clearly the most enjoyable. Signiﬁcantly, the course was far better taught than any other. Rather than students learning in order to "jump through [examination] hoops," it allowed them to meet their individual knowledge needs in order to go into business.

John said that it was gratifying to be led by lecturers with realistic expectations who understood students' individual circumstances and needs - that students often had demanding jobs and family commitments. Not only were the interactions between staff and students excellent, the camaraderie among the participants was ﬁrst-class. It has not only established many friendships but opened up a wide range of networking opportunities.