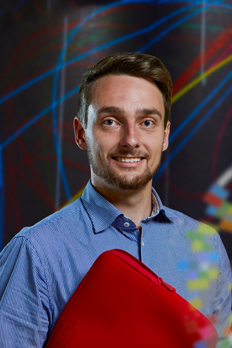 Tom Mulder's career as an economic analyst at the Reserve Bank of New Zealand had its origins in his Christchurch school days.

“I had the same economics teacher for most of my time at high school and he inspired me to become passionate about the subject. He also recommended Otago as having a good economics programme.”

Tom was ready for a change of scenery and headed to Dunedin for his BCom. He flatted with friends he made in his first year at Carrington College and soaked up the scarfie culture.

During his BCom he noted the influence that prestigious central banks have over countries’ economies, and set himself the goal of working at the Reserve Bank of New Zealand. As the bank only accepts people with postgraduate qualifications into its graduate programme, Tom went on to do a Master of Economics.

“Otago’s one-year master’s programme was great in that I could get it done in half the time of a traditional master’s degree, and while I was doing it I was able to go through the Reserve Bank’s selection process to apply for a role in their graduate programme.”

Tom rates the quality of Otago’s teaching for helping him get through some tough interviews, and when he graduated with distinction he was able to go straight into the career he wanted.

“A lot of what I learned in my master’s I still use in my job today. Otago’s academic support was great.

“My supervisor and all my lecturers were friendly and approachable and staff arranged meetings and events for the masters’ class and were always available for a chat. The central library was a great place to study and was a very popular place around exam time and the University itself is beautiful.”

Tom’s happy where he is, but sometime in the future he likes the idea of travelling in Europe and possibly trying working in the private sector.