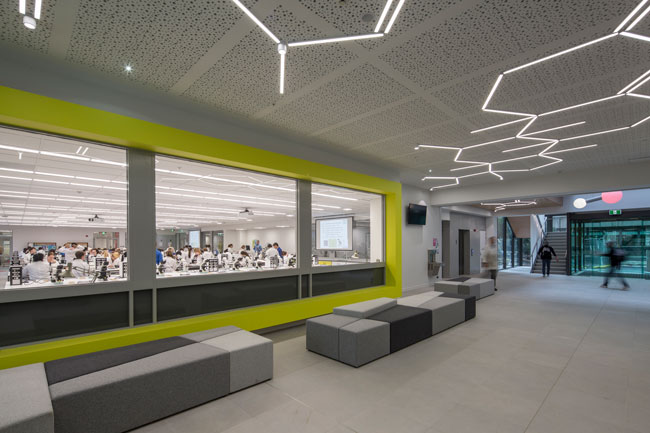 Science at work … through the yellow frame is a view from Mellor Laboratories’ main foyer into one of the building’s two new cutting-edge, flexible super-laboratories. Ceiling strip lighting in this area represents molecules such as caffeine and adrenaline, while the atrium’s hanging lights (rear) look like diatomic molecules and change colour.

Winners will be announced during a ceremony at the Skyline Queenstown on 7 June. 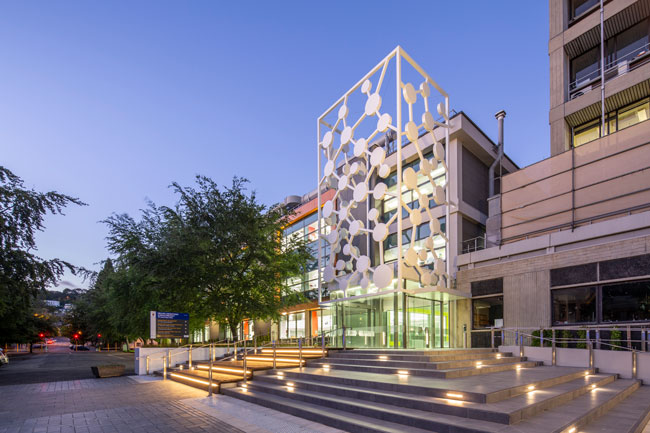 New gateway … The campus-facing main entrance to Mellor Laboratories now includes a 12.5 tonne abstract molecular network – the gateway to the Division of Sciences. The building’s concrete façade has also been hidden behind living walls of ivy and timber-look cladding.

The science project transformed a ‘brutalist’ concrete building into a central campus enhancement that promotes science both inside and out, Mr Perry says.

Inside the building, large windows provide views into two cutting-edge, ground floor, flexible, super-laboratories that can each cater for 112 students or two classes simultaneously – improving about 2000 first-year students’ experiences weekly and catering for growth.

Research labs have been purpose-built for senior students and six specialties, while students now have networking and collaborating areas.

The building has its first designated Chemistry outreach lab to prepare off-site and on-site classes for high school pupils – potential future students – instead of using the lab technicians’ area, he says.

A lobby for first-year students’ super-labs includes 232 lockers – each with a USB port for charging, power socket and LED lighting – that were used about 2,000 times weekly in semester one last year. Students no longer take bags or electronic devices into labs, which helps prepare them for workplaces.

A campus-facing entrance is now recognisable as the gateway to the Division of Sciences, with sweeping steps leading to an entrance topped by a 12.5 tonne, steel, three-storey, three-sided, abstract molecular network.

A highway-facing wall has a 1.5 tonne metal back-lit representation of a Laurenene molecule, a rimu tree extraction discovered by Otago PhD Chemistry student Denis Lauren in 1970.

Science 1 has also been renamed Mellor Laboratories, to honour 1898 Otago graduate Joseph William Mellor. During World War 1, he developed ceramic refractories for British steel production, and he made an unparalleled contribution to scientific literature by producing a 16-volume, 16-million word treatise on inorganic chemistry.

The building's concrete exterior has been covered with living walls of ivy and timber-look cladding. 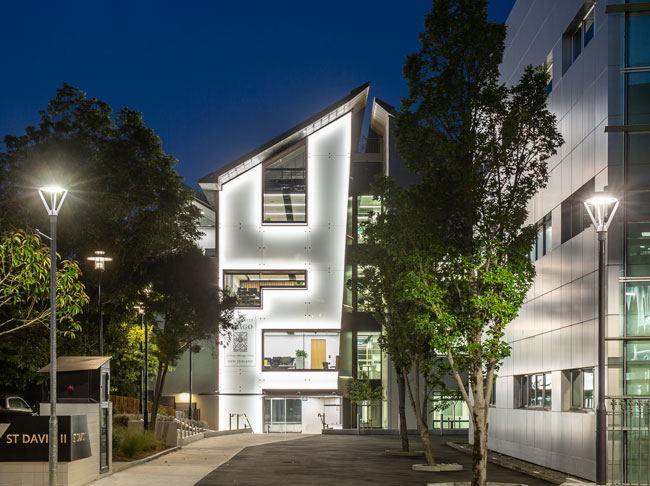 New life … The previously vacant St David II building now has a ground-level entrance that faces the main campus and literally glows towards it at night, through the addition of a back-lit glass façade.

The redevelopment will ultimately reduce reliance on leased premises, but in the meantime, leased space vacated by staff who moved into St David II is already being used by staff decanting for the University’s large-scale dentistry new build and refurbishment in Great King Street.

In St David II, glass-fronted acoustically-treated quiet rooms along a central ‘spine’ are for reading documents, phone calls, discussions, and meetings. Some of those rooms open up completely to the flanking open plan office areas.

Having that central area maximises the open plan spaces where staff work, while large windows let light flood inside and modular furniture meets any changing needs, he says.

All carpet tiles have acoustic backing to absorb sound, while 350 hand-finished suspended acoustic ceiling panels absorb sound and provide easy access to the service pipes above them.

For the first time on campus, Low Emissivity (Low E) Glazing film has been added to an entire building’s existing single-glass windows to prevent over-heating or over-cooling people beside windows.

Durable materials added during the project need minimal maintenance, adding the building to the district heating scheme means power is cheaper, locally-sourced woodchips are increasingly used to fire the boiler that produces the power, and a heat-recovery system heats the water.