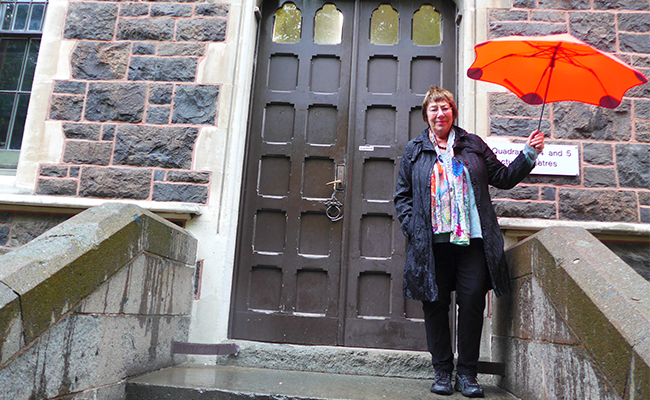 Professor Anna Wirz-Justice on a visit to Otago in 2017.

Professor Emerita at the Centre for Chronobiology, Psychiatric Clinic of the University of Basel in Switzerland, Professor Wirz-Justice graduated from Otago with a BSc and MSc (1964), majoring in Chemistry, and also studied Philosophy, winning the Joseph Pullar Philosophy prize in 1962.

The international Daylight Award encourages the scientific and practical application of daylight, aiming to raise a holistic understanding of daylight and increase its positive impact on life.

Professor Wirz-Justice introduced light therapy for Seasonal Affective Disorder to Europe and has studied light’s effects on other forms of depression (such as during pregnancy), borderline personality disorder, dementia, as well as certain sleep disorders. Among many distinguished accolades and prizes for her research, in 2013 she received the Australian Society for Medical Research Medal for her contribution to sleep research.

“It’s a long, meandering path from organic chemistry to how light affects the human brain. But that’s how science often works, and that’s where curiosity can lead one in new directions,” she says.

“The unexpected discovery that light is an antidepressant led to testing the therapeutic effects in other mood and sleep disorders. And the also unexpected discovery that our eyes contain a novel photoreceptor which feeds light information to the circadian clock, formed the basis of an unprecedented flowering of research in biological rhythms, which I had the fortune to participate in.

“The Nobel Prize in 2017 to the molecular biologists who unravelled the mysteries of how this inner clock ticks, made our field quite respectable. Hopefully, the Daylight Award will reawaken interest in the importance of natural lighting for health and well-being, in our built environment and our behaviour.”

Professor Wirz-Justice has collaborated with artists and architects to apply circadian principles in design. This has now led to curating a chronobiology exhibition Lighten Up: On Biology and Time, in March 2023 at the art/science museum of the Swiss Federal Institute of Technology Lausanne (EPFL).

Maybe it is not a coincidence that the museum Director and lead curator is also an Otago alumna, Professor Sarah Kenderdine. Professor Kenderdine, who majored in Archaeology, Anthropology and Phenomenology of Religion at Otago, was appointed Professor of Digital Museology at EPFL in 2017, where she has built a new laboratory for experimental museology.