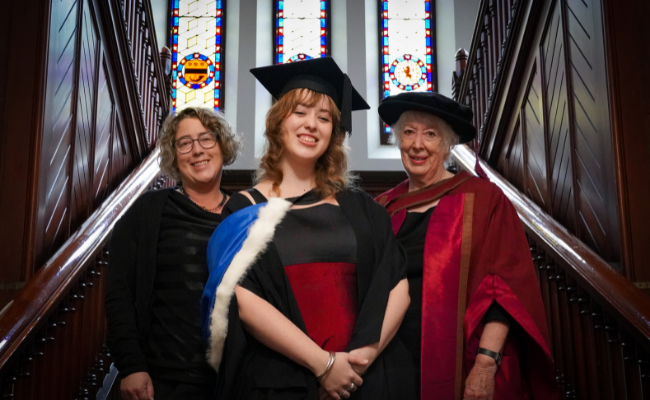 Graduation is a special time and a rite of passage for many. Even more so when a family celebrates the first direct fourth-generation graduate woman to pass through Otago’s doors.

Kes Harris-Handscomb crossed the stage in early May collecting her degree and representing those who came before her, her mother Lison Harris, her grandmother Professor emerita Jocelyn Harris and her great-grandmother Margot Ross.

The Bachelor of Science student (Chemistry and Science Communication) says that studying at Otago is “in the blood”.

“This graduation feels very significant considering it’s also representing four generations of women. At the time when my great grandmother was studying it was very uncommon for women to achieve higher education and that’s kind of a testament to the women in our family. We have strong beliefs that women can succeed in areas that may not have always welcomed them. That legacy also gave me an idea of what studying at Otago may be like as a progressive place to be."

The Dunedin-born graduate has recently returned to Wellington for work but says Dunedin is still one of her homes.

“I’m in my third week at the Intellectual Property Office in Wellington, starting my job as an Associate Patent Examiner. My family lived in Hong Kong for a few years and I did my schooling in Wellington. I wanted to study at Otago to experience the student culture and Dunedin felt like the choice for me with family attending before me and more family still in the city."

Kes was originally set to graduate last year but due to COVID-19 restrictions the ceremony didn’t go ahead. This time she graduated successfully in the presence of her mother and grandmother.

"I am so proud to see Kes graduating from the University of Otago, and so proud of my mother and my grandmother playing such a vital role in making tertiary education accessible to women.
Second-generation Professor emerita Jocelyn Harris graduated MA in 1961 before heading on a scholarship to Birkbeck College London to complete her PhD.

“Back then only 2000 students attended Otago University rather than 20,000 now. So we got to know people in other faculties very well. End-of-year exams meant that we had more time for drama, music and other activities. Tertiary education was free, and student debt wasn't an issue."

Jocelyn grew up in Dunedin. After eight years abroad, she returned to Otago where she taught at the University 1971 – 2005.

“I was always very interested in women writers. My Contemporary Women's Literature course was especially exciting, because the books were fresh and new – we were pioneers discovering them for ourselves.

“I had a wonderful time teaching at Otago and met many magnificent women who have gone on to great things. They were fizzing with excitement and new ideas about literature.”

First-generation Margot Ross graduated MA Otago in 1934. The first woman to teach in the History Department, she continued to lecture and write about notable New Zealand women, local history, and international affairs for the rest of her life.

Women gained degrees for the first time in the British Empire, right here in Dunedin, says Jocelyn. "The way has been paved by women such as my mother, down through the generations."