Ngāi Tahu is a large iwi (tribe), which is spread over much of Te Wai Pounamu (the South Island of Aotearoa). This iwi descend from a common ancestor, Tahu Potiki. Ngāi Tuahuriri is the hapu that centred themselves at Tuahiwi, about 6km north of Kaiapoi, which was a main centre for Ngāi Tahu and the pounamu trade.

In 1848, a man named Henry Tacy Kemp brokered a deal with Ngāi Tahu leaders, resulting in the sale of most of the South Island – 20 million acres – for 2000 pounds, which included the land you stand on today.

This purchase was made using underhanded tactics, such as threats that if Ngāi Tahu did not sell the land to him he would buy it off another tribe, and they would lose the land without getting anything in return. The terms of the contract were deliberately misinterpreted, and Ngāi Tahu were forced off lands they believed they never sold, and denied rights to mahinga kai (food gathering sites) and wahi tapu (sacred sites).

The personal impact of colonisation, and specifically the impacts of the Kemp purchase have been difficult for many to perceive, but recent events in Ōtautahi may aid us in our quest to make the continued relevance of this history known. 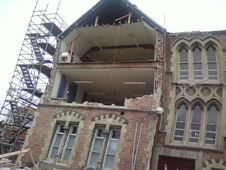 In Ōtautahi, there was massive upheaval, with the loss of homes and livelihoods following the numerous earthquakes from September 4th 2010 and throughout 2011. The evidence will be forever written across the city, in the architecture of the buildings that rose from the rubble, and the memorials to those loved ones who lost their lives in the course of these devastating natural events. The seismic unrest in the region translated into unstable homes, and uncertain futures. People were permanently disabled through physical injury, and the mental health of Cantabrians was tested, while health services were under-prepared for the impact of the cumulative stress these earthquakes triggered.

The ripple effects of both of these events have significantly changed the course of countless lives, and caused a dramatic shift in the way we view the past, experience the present, and hope for the future.

This i-hīkoi acknowledges the role of Ngāi Tahu in the past, present and future of Ōtautahi-Christchurch. You will navigate this i-hīkoi self-guided tour through 5 further locations around the University of Otago, Christchurch campus. We invite you to now begin the hīkoi, by exiting the building, and walking along Riccarton Avenue heading West. Your next destination will be on the path inside the gates to Hagley Park North and the Botanic Gardens.