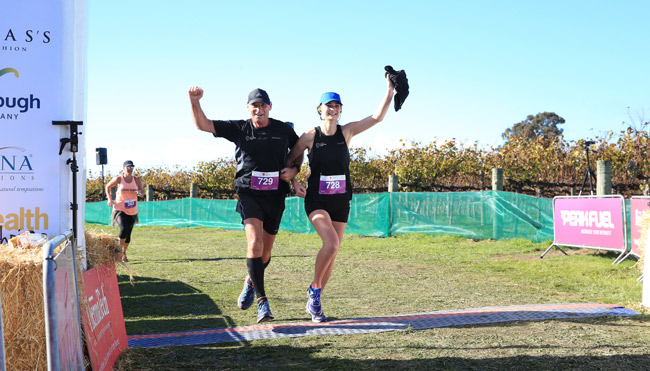 Bailey Kennedy (right) crosses the finish line of the Saint Clair Vineyard Half Marathon with her father Steve.

Christchurch campus PhD student Bailey Kennedy understands the impact bowel cancer can have on a family. She saw her firefighter father Steve battle, and overcome, it when she was a teenager.

The experience inspired Bailey’s PhD topic. It also motivated her, with dad Steve, to complete the Saint Clair Vineyard Half Marathon and raise almost $3000 for Bowel Cancer NZ.

The previously fit and healthy Steve was diagnosed with stage three bowel cancer in Bailey’s final year of high school. After 10 months of chemotherapy and radiation, surgery, more chemotherapy and a final surgery, Steve went into remission. Initially a keen student of art and design, during Steve’s battle with cancer Baily turned her attention towards a career in medical research.

She is now undertaking her PhD with the Mackenzie Cancer Research Group on the effectiveness of a new score – the immunoscore – to better grade the stages of cancer.

Bailey says cancers, like her father’s, are currently graded from stage zero to four – with four considered a fairly dire scenario. Grading is based mainly on physical properties such as size, position and whether it has spread to other parts of the body. Grading influences treatment.

The immunoscore, developed by a Frenchman in 2006, incorporates information about the immune response into the score. Bailey says improving the accuracy of cancer grades will mean high-risk patients are identified earlier, and treated accordingly.

Baily and Steve decided to run the marathon to support the ‘awesome’ charity Bowel Cancer NZ. They aimed to run the 21.1km half marathon in under two hours, achieving this with a time of one hour and 52 minutes. Their efforts raised $2939.