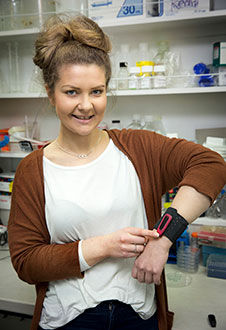 Breast cancer patients are wearing Fitbits to record their activity in a University of Otago, Christchurch, study exploring the impact of exercise on chemotherapy response.

The pilot study of 40 Canterbury women is being done by Pathology postgraduate student Rebekah Crake. She is doing her PhD at the campus’ Mackenzie Cancer Research group, which includes oncologists, geneticists and laboratory scientists.

Crake says the Canterbury women’s physical activity will be tracked during their chemotherapy treatment. Data from the Fitbits will be compared to the women’s response to chemotherapy to see if any trends emerge.

“The basic idea behind the study is that inflammation can decrease activity of the liver. Exercise can reduce inflammation in the liver, and the liver needs to be working well to metabolize chemotherapy drugs.”

Crake said overseas research suggested people who were physically active had a better quality of life, were less likely to have their cancer return after treatment, and were more likely to survive the disease.

She began recruiting patients from the Canterbury District Health Board’s oncology service in March this year. She hopes to have results from the study by the end of 2019.

“If we can show a trend in data that the women who exercised more had better response to chemotherapy it could warrant a larger study, with more people, and women doing different levels of exercise, to understand in greater detail the physical activity needed to make a difference. It’s pretty exciting to be involved in a project that could potentially help people improve their outcomes.”

Crake’s pilot trial includes women of normal weight and those who are obese. Dr Margaret Currie, of the Mackenzie Cancer Research Group, says there is a growing body of international evidence linking obesity with poorer outcomes for cancer patients.

“Obese patients seem to fare worse in terms of both their survival rates and response to treatment.’’

For this reason, Dr Currie and her colleagues are running several laboratory and clinical studies on the interaction between fat and cancer cells to uncover the connection.