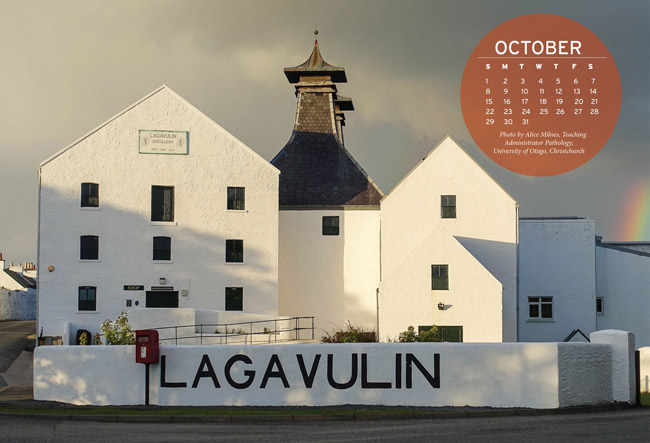 The image for October 2017’s digital calendar was taken by Alice Milnes of Pathology at the Christchurch campus during a trip to Scotland.

A rainbow appeared in the sky behind a distillery in Scotland just as Alice Milnes began photographing it – making the photo which has become this month’s digital calendar.

Our digital calendar, released each month, features the 12 winning and notable entries from the previous year’s Bulletin Board photo competition.

Alice Milnes a teaching administrator in Pathology at the University’s Christchurch campus took the photo at about 8.30pm in June 2015 during her first night of a holiday in Scotland.

“The weather was suitably moody for Islay but I was surprised when the rainbow appeared behind the distillery as I was taking photos of it.

“After I took this photo we hopped in the car and headed towards Ardbeg Distillery which is a mile down the road in the direction of the rainbow.We stopped as Ardbeg came into view because the end of the rainbow was in the middle of the distillery grounds. I totally forgot about taking photos at this point and just sat watching until the clouds rolled back in and the rainbow faded. It was a magical start to our journey around the Scottish highlands and isles.”

To download the October digital calendar, simply click on the link for the appropriate resolution for your monitor (or closest size), right click on the image and set it as your desktop background.