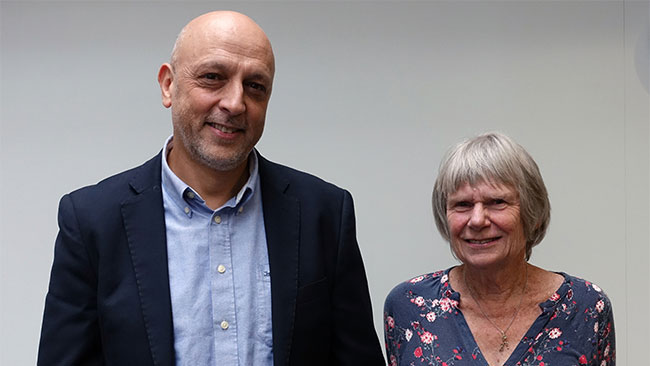 The Department of Pathology and Biomedical Science has established a named, annual lecture in honour of Professor Christine Winterbourn from the Centre for Free Radical Research.

Professor Rafael Radi, Director of the Center for Free Radical and Biomedical Research, from the University of the Republic, Uruguay gave the inaugural lecture at the UOC Research Seminar this afternoon.

Professor Radi is a top researcher in this field, an energetic speaker, and friend of several members of the Centre for Free Radical Research. Professor Winterbourn led the questioning after Professor Radi’s lecture, which described the antioxidant enzyme systems of intracellular pathogens.

Professor Winterbourn established and led the Centre for Free Radical Research for several decades. She is one of UOC’s most esteemed researchers, an internationally respected scientist who has helped develop and shape the field of free radical biology, now seen to be a fundamental process at the heart of so many major diseases.

She has been honoured many times through her career, and in 2011 was the first woman to be awarded New Zealand’s highest science honour, the Royal Society’s Rutherford Medal. Professor Winterbourn remains a productive and energetic member of this department.