Carol Khor, a student at Burnside High School, has been awarded the coveted Prime Minister’s Te Puiaki Kaipūtaiao Ānamata Future Scientist Prize for research, supervised by mentors at the University of Otago, Christchurch. 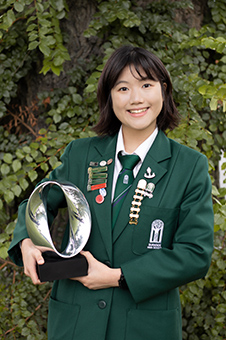 The Year 13 student, who was awarded the $50,000 Royal Society Te Apārangi prize at a ceremony in Wellington today, was chosen as the 2021 winner for a laboratory research project into melanoma – the most fatal form of skin cancer in Aotearoa New Zealand.

Carol worked on the project with mentors PhD student Therese Featherston and Professor Mark Hampton from the Department of Pathology and Biomedical Science’s Centre for Free Radical Research.

“We are over the moon that Carol has won this award and feel it’s extremely well-deserved,” Miss Featherston says.

“Carol has worked so hard in the lab from day one. She’s an incredibly intelligent person and her future is very bright. This $50,000 prize will allow her to pursue her tertiary studies in whatever direction she chooses, although I quietly hope she stays in science.”

Carol first approached Professor Hampton at a local science fair, expressing her enthusiasm to become involved in a science project. She was invited into the Centre for Free Radical Research labs during her Year 12 school holidays to assist with existing projects.

He says Carol impressed them with her enthusiasm, drive and ‘can do’ attitude.

“It’s exciting watching a young person such as Carol who shows so much ability in science. As a country we should celebrate and support these young people more. They have a very important role in our future.”

Miss Featherston says the team’s relationship with Carol grew from there.

“She was initially very quiet but extremely focussed, driven and very inquisitive. Her confidence in talking and writing about science soon grew and she learned skills that aren’t usually taught until university level. We soon involved her in a project aligned to our drug-resistant melanoma work.”

Carol says being allowed such a special hands on opportunity has been inspirational.

“I’ve been super fortunate to be part of the amazing group that strives to fight against cancer here at the Centre for Free Radical Research labs. It’s such incredibly important work.”

Her research looked at combining the cancer drug vemurafenib with auranofin, a gold-containing compound known to inhibit the antioxidant system in melanoma cells. Auranofin is an old drug previously used for treating rheumatoid arthritis.

Results shows that combining the drugs produced higher numbers of melanoma cell death, much greater than with the cancer drug alone.

Carol says the results showed auranofin could be used at low doses.

“This is desirable as the gold compound is not cancer cell specific. However, when combined with the cancer specific drug, I recorded a significant decrease in cell viability. This is a promising result towards delivering a higher efficacy treatment towards the targeted cancer cells.”

Although Carol and her team hope to publish the findings at the end of this year, the researchers say much more work is required before any results can be translated into clinical studies.

“I personally had a similar experience around her age, where I was welcomed into a lab for a summer to complete a project between year 12 and 13. This was what sparked an interest in biomedical research for me, so ever since then I have wanted to do that for someone else.”

COVID-19 has put a brake on Carol getting back into the lab this year, but she will continue her experimental work in June.

“The goal is to get her name on a published paper before she leaves school, and to provide her with a range of skills, both in the lab and outside, that will help set her up for a wonderful career in the future. Ideally, we’d love to see her back at the lab in the years to come, but whatever she decides to do with her future, I know she’ll be successful,” says Miss Featherston.

“Carol has tasted the thrill that can come from research. To become a successful scientist, she will also need to endure the frustration of failed experiments, rejected papers and the constant struggle for funding. She is just beginning on her journey in science, but she has the potential to go a very long way.”

Carol is keen to study science or medicine next year.

“No matter where I end up, my desire to innovate and create will lead me towards the right path.”