From CERN to the University of Otago, Christchurch 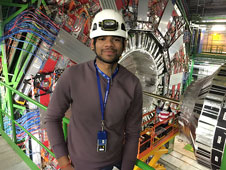 Srinidhi Bheesette in front of the Compact Muon Solenoid (CMS) at CERN.

The first student from CERN (the European Organization for Nuclear Research) has begun their PhD at the University of Otago, Christchurch, working on developing the next generation of medical scanners.

India’s Srinidhi Bheesette is the first of a number of students with experience at CERN who are expected to undertake PhD study at the Christchurch health campus over the next few years.

Srinidhi will be part of an international team of physicists, engineers, computer scientists, radiologists, and surgeons working on developing the MARS 3D colour scanner.

The scanner will revolutionise medical imaging with its 3D images and ability to show in colour different components inside the body. The first scanner to fit a human is expected to be finished in 2018, followed by several years of testing. 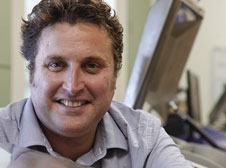 Professor Anthony Butler, Head of the Centre for Bioengineering and one of the heads of the MARS project.

The technology at the heart of the scanner was originally developed at CERN, home to the Large Hadron Collider and experiments on how the universe was created. The technology was modified for x-ray applications by a collaboration of dozens of universities around the world, and has been incorporated in biomedical scanners by the MARS programme.

The MARS scanner is the result of partnerships between New Zealand academics and industry, including researchers at the Universities of Otago and Canterbury, such as radiologist Professor Anthony Butler and his physicist father Professor Phil Butler.

Srinidhi completed a Bachelor's in Electronics and Telecommunication Technology in India before securing a ‘dream’ three-month internship at CERN. There he worked on the Compact Muon Solenoid (CMS) experiment, a particle physics detector built on the Large Hadron Collider.

“It was an exciting and inspiring experience being at CERN, where the world's best science - aided by cutting-edge detector and instrumentation technologies - is being carried out. It’s such a dynamic place with very little hierarchy.”

Several months into his study, Srinidhi says he is enjoying his PhD experience at the University of Otago, Christchurch, which has a strong emphasis on pioneering research with practical applications.

He learnt about PhD opportunities at the Christchurch campus through a CERN mentor. Srinidhi says the University of Otago’ Christchurch’s Centre for Bioengineering has an excellent international reputation and its leaders, such as Professor Anthony Butler, have collaborated with CERN.

Srinidhi will spend some of his three-year PhD working from CERN where he will test modifications to the chip.