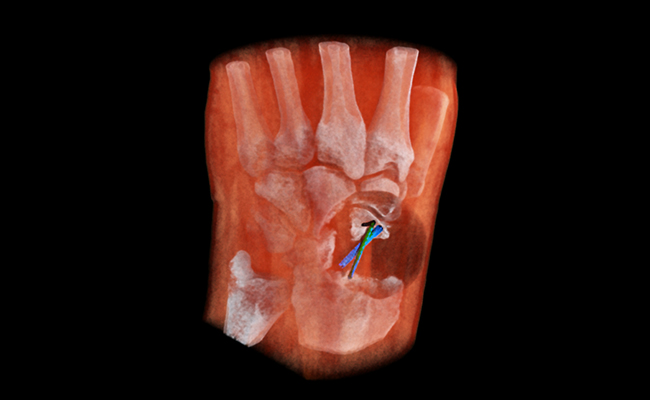 A MARS scanner image of a wrist.

A revolutionary compact 3D colour scanner invented by a University of Otago, Christchurch professor will soon be tested in a large scale international clinical trial.

This development follows a promising pilot study of the specialist hand and wrist scanner in New Zealand orthopaedic patients.

More than a decade ago Professor Anthony Butler (Head of the Department of radiology, Christchurch campus) and his father Phil (a University of Canterbury professor) began developing an x-ray-based scanner to produce clearer, colour images of the human body than existing radiology machines.

In 2018, after years of research involving the Universities of Otago and Canterbury, the MARS team scanned the first human body. 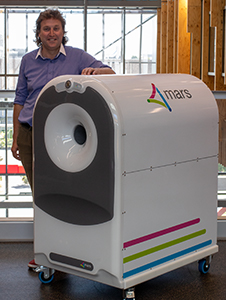 Professor Anthony Butler and the MARS scanner he invented.

They then developed a special compact scanner for diagnosing hand and wrist injuries. Clinical trials of the scanner will begin from early 2021 with up to 150 patients at a 24 Hour surgery in Christchurch and Lausanne University Hospital in Switzerland. The international clinical trial will be run by MARS Bioimaging Ltd (MBI), a company founded to commercialise the invention, and the University of Canterbury.

Professor Butler says pre-clinical versions of the MARS scanner are already used for research purposes at dozens of prestigious universities across the globe.

It is exciting to now be taking the technology, backed by more than a decade of research done at the University of Otago, into the clinic, he says.

Pending regulatory approvals, the wrist scanners could be available for clinical use within the next year, Professor Butler says. The wrist scanner is the first in a range of products planned.