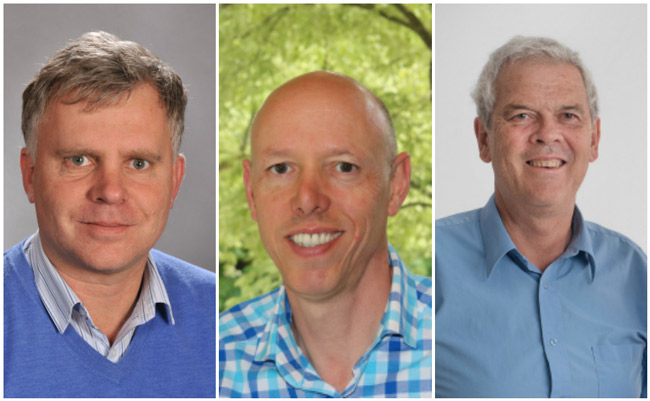 University of Otago researchers (from left) Professors Philip Hill, Richard Porter and Stephen Chambers are among nine nationally to have received more than $2 million from the Health Research Council for feasibility studies which may lead to larger studies.

Three University of Otago researchers have successfully secured almost $750,000 between them from the Health Research Council (HRC) to undertake feasibility studies.

Professor Stephen Chambers, from the Department of Pathology, University of Otago, Christchurch, and Professor Philip Hill, the McAuley Professor of International Health and Co-Director of the University of Otago’s Centre for International Health, based in Dunedin, have been awarded $250,000 each; while Professor Richard Porter, Head of the Department of Psychological Medicine, will receive $246,986 for a feasibility study of psychotherapy and bipolar disorder.

Professor Porter says he is pleased to have secured the funding as it will enable him and his research team to find out whether a larger clinical trial on psychotherapies is warranted in future.

Psychotherapies are very helpful in treating bipolar disorder but not widely available in the public health service because they are considered expensive and impractical, Professor Porter explains.

"Feasibility studies are a key pathway to allow researchers to innovate, but also address potential deal-breakers or risks to a larger study."

He and his team will trial the introduction of a specific psychotherapy called “Social Rhythms Therapy” into routine clinical practice. If this is successful a larger clinical trial will compare outcomes for patients who receive this therapy with those who receive current conventional treatment.

“Feasibility studies are a key pathway to allow researchers to innovate, but also address potential deal-breakers or risks to a larger study. We fund these early and smaller studies to maximise the chance that future and larger studies are successful,” Professor McPherson says.

The HRC received 31 applications for these grants this year and gave approval to nine, totalling $2,230,458.

Professor Chambers’ research will test the feasibility of vitamin C as a treatment for people in hospital with pneumonia.

Community-acquired pneumonia is a major cause of illness and death. There is mounting evidence that vitamin C supplementation improves outcomes from life-threatening infections, including pneumonia.

The study will assess the feasibility of conducting a randomised, double-blind, placebo-controlled trial of vitamin C therapy with conventional treatment. If successful, the study could be scaled up to a larger clinical trial and, ultimately, become a standard treatment for the condition, Professor Chambers says.

"I am very pleased that the strength of Otago research capability has been recognised in this way."

Professor Hill is leading a study with the ultimate goal of eliminating tuberculosis (TB) in Māori. TB is the world’s leading cause of death, due to an infectious disease, with global control strategies unable to eliminate the disease and resistance to TB drugs increasing.

Although New Zealand has a low rate of TB, new cases continue to occur and half of New Zealand-born TB patients are Māori.

In a bid to progress the study and in the hope the work will be led increasingly by Māori, Professor Hill and his team have established a strategic new partnership.

The Centre for International Health is working with the Director of Kōhatu, the University’s Centre for Hauora Māori, Associate Professor Joanne Baxter, to partner with the Waikato District Health Board’s Te Puna Oranga service, led by Dr Nina Scott and will co-supervise a Māori research fellow.

University of Otago Deputy Vice-Chancellor (Research and Enterprise) Professor Richard Blaikie is pleased to learn of the researchers’ success on the back of last week’s announcement of almost $1.5 million of HRC funding for emerging researchers.

“I am very pleased that the strength of Otago research capability has been recognised in this way,” Professor Blaikie says.