Christchurch campus comes together to ‘share in each other’s warmth’ 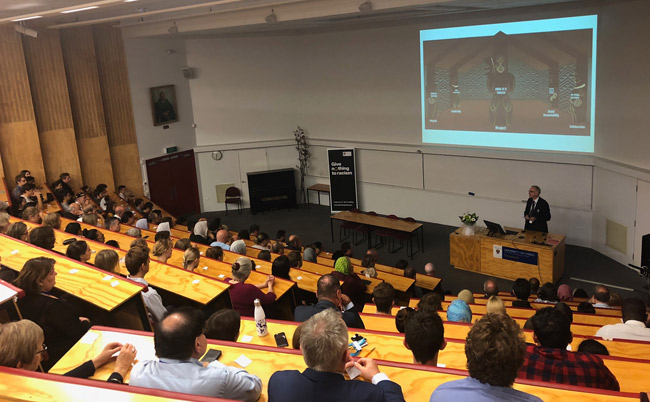 Christchurch staff come together on Friday for a Hui Whakapiripiri.

A week after the mosque shootings, Christchurch medical student Mohamud Osman stood in front of staff and fellow students and shared a story of love, kindness and forgiveness.

The sixth-year student was one of a number of speakers at the University of Otago, Christchurch’s Hui Whakapiripiri – an event designed to bring the campus together in the wake of the horrific events of 15 March. The term ‘whakapiripiri’ means a coming together to share in each other’s warmth.

Osman shared a story about an elder in the Muslim community, he calls ‘Uncle’, who was shot at the Al Noor Mosque, situated just a few minutes’ walk from the Christchurch campus. Before being discharged from hospital, Osman’s uncle asked to be pushed around the hospital in his wheelchair so he could personally thank as many staff as possible for their care of him and others injured in the attacks. Osman says this sense of gratitude extends beyond the walls of the hospital. He and his wider family wanted to thank people for their expressions of love and kindness to the Muslim community in the wake of the attacks, and spread a message of forgiveness rather than sorrow or anger.

"Small gestures of kindness can and will play a big role in shaping people and every single one of you today can help shape someone for the better. Sometimes all it takes is a smile."

Osman was one of a number of speakers at the Hui Whakapiripiri, including the Vice-Chancellor Professor Harlene Hayne, the Chancellor Dr Royden Somerville, and Pro-Vice-Chancellor of Health Sciences Professor Paul Brunton. The representatives from Dunedin, each in their own way, expressed sentiments of care and thanks to the assembled crowd for how they as individuals and in groups had rallied to support each other and those most affected. They also shared a commitment for the University and its people to lead and drive changes for the better.

University of Otago, Christchurch, Dean Professor David Murdoch said Muslim staff and students, from so many countries, have long been a key part of the campus and its culture. Professor Murdoch said along with expressing support and love for those affected by the attacks, he renewed the campus’ commitment that it be a safe sanctuary for everyone.

“Ignorance and fear are so often at the heart of racism. One counterpoint to ignorance and fear is education. Through knowledge comes understanding, that sets the scene for respect and compassion. We are an educational institution and are pretty good at teaching and learning activities. But we need to do better, much of this is educating ourselves.”

To end the hui, Professor Murdoch read out words provided by Hamzeh Obeidat, president of the University's Muslim Students' Association. Obeidat urged people to “Look to the person on your right, left, in front, and back. You have no idea what everyone is going through. So, smile, genuinely. Smile as you walk past people, bid people a good day randomly, open doors for others, start up a conversation and find similarities. Small gestures of kindness can and will play a big role in shaping people and every single one of you today can help shape someone for the better. Sometimes all it takes is a smile.”

Many of those at the Hui Whakapiripiri sat in Hagley Park and observed the two minute national silence. Others expressed their sentiments for those affected in other ways, such as a group of surfers including University of Otago, Christchurch staff, who formed a heart shape with their boards in the water at Sumner Beach over the weekend or cyclists who formed a heart shape with their bikes. 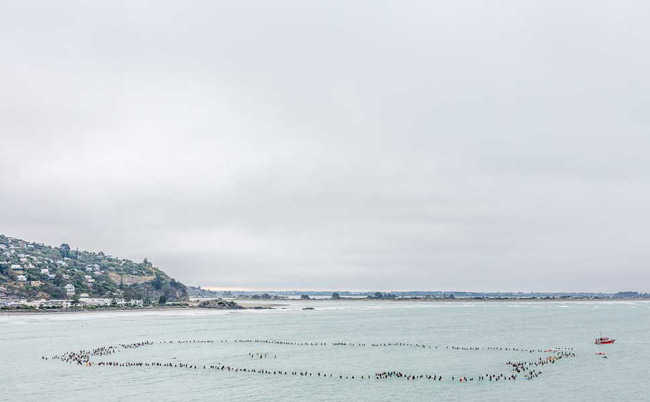 Surfers, including many Christchurch campus staff and students, form a heart in the sea with their boards, off Sumner beach over the weekend. Photo: Tony Brunt.