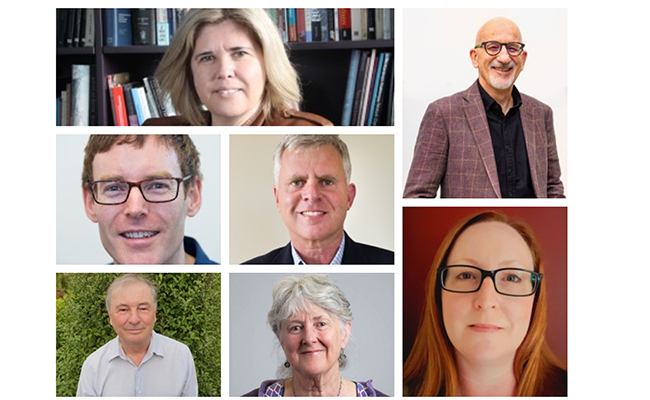 Seven University of Otago staff are among the new Fellows elected to the Academy of the Royal Society Te Apārangi.

Being made a Fellow recognises distinction in research, scholarship or the advancement of knowledge at the highest international standards.

Chair of the Academy Executive Committee Professor Charlotte Macdonald FRSNZ says it was pleasing to see an outstanding cohort of Fellows elected this year, all with exceptional expertise.

“Ngā Ahurei Hou a Te Apārangi the newly elected fellows have made exceptional contributions to knowledge in their fields and across disciplinary boundaries. Their election adds to the depth of knowledge held within the Academy; they will help support the purpose of Royal Society Te Apārangi to engage with New Zealanders on topics important to all and to recognise outstanding researchers working in Aotearoa.”

The new Fellows will be formally inducted at a mixed mode in person and online event in Whanganui-a-Tara Wellington on 28 April.

The Otago Fellows are:

Barbara Brookes’ research has contributed to a vast international expansion of the historical canon from the 1970s, particularly in relation to the history of gender. It continues to be innovative and widely published, winning her such significant accolades as the Royal Society Te Apārangi’s Humanities Aronui Medal, being made a Member of the New Zealand Order of Merit and the 2017 Ockham Award for the best work of illustrated non-fiction. Brookes is both a skilled synthesiser and an innovative user of source materials as varied as archives, personal papers, film and photography. Her award-winning History of New Zealand Women sophisticatedly knits these sources together to create her ‘magisterial’ and ‘highly readable’ book. Her engaging and inclusive personal research and scholarly collaborations have cast a historical lens on topics as diverse as women’s caring work, mental health and notions of the healthy body.

Professor Peter Fineran is an internationally-recognised leader in bacterial immune mechanisms who has greatly advanced our understanding of interactions between phages, mobile genetic elements and bacteria. In particular, he has made world-leading contributions to the area of CRISPR-Cas biology and abortive infection systems. He applies his expertise in phage biology to develop phage-inspired antimicrobials, currently to tackle agricultural pathogens. Fineran is a strong research mentor, training over 50 post-graduates and 14 post-docs, and an accomplished science communicator. His scientific excellence is evident from his impressive publication record and international distinctions, including being recognised as a top 1% cited researcher (Web of Science) and receiving the Fleming Prize (Microbiology Society, UK), which is awarded to an outstanding researcher within 12 years of achieving their PhD.

Professor Debbie Hay is an innovative molecular pharmacologist whose seminal contributions have enhanced understanding of the roles of G protein-coupled receptors (GPCRs) in conditions such as migraine, diabetes and obesity. GPCRs are key human drug targets but have complex patterns of selectivity. Her research has defined how receptor activity-modifying proteins (RAMPs) modulate GPCR activities and brought new understanding of how peptide ligands are engaged. This knowledge crucially underpinned the development of several new first-in-class therapeutic drugs, particularly for migraine. An extraordinarily productive, highly cited (Clarivate) scientist (164 publications, 2 patents, H-index 47) and an outstanding mentor of young researchers, she has established herself as a world leader in a complex field, in high demand internationally as a collaborator, speaker, writer and consultant to industry.

Professor Philip Hill, McAuley Chair of International Health and Foundation Director of the University of Otago's Centre for International Health, is a world leader in tuberculosis case contact research, using this powerful research platform to evaluate new tools against tuberculosis, and to test hypotheses about the properties of the pathogen and how it relates to interventions, including vaccines. His research has had significant impact, including on how new tools are used in practice, and in guiding new approaches to biomarkers and vaccine evaluations. He has a focus on training the next generation of global health researchers, especially from under-resourced countries.

Professor Nigel Perry has contributed greatly to new knowledge on natural products, the diverse molecules that regulate many interactions in nature. He is a world leader in understanding the impacts of production and processing on natural products in medicinal and culinary plants. He has discovered more than 80 previously unknown compounds from New Zealand native marine and terrestrial plants and animals. He combines excellence in fundamental science with a drive to create impacts through practical applications. He is an inventor on six patents, including an insect attractant in commercial use around the world. He works with Māori on taonga organisms, combining mātauranga and science. He received the 1994 NZ Science & Technology Medal for excellence and the 2013 New Zealand Institute of Chemistry Prize for Industrial and Applied Chemistry.

Professor Murray Thomson is a researcher in dental epidemiology and health services who has made important and sustained contributions to knowledge in a number of fields over the last three decades. His work in the renowned Dunedin Study has enhanced understanding of oral health throughout life. He is an expert on the oral condition ‘dry mouth’ and has developed measures which are being widely used in clinical practice and research. He has also made important contributions to understanding of the oral health of the ageing population and of the effectiveness of dental care in improving the lives of children and their families. Murray’s national oral health survey work in Australasia has been internationally influential. He has also provided many years of service as an Editor-in-Chief for international scientific journals.

Professor Angela Wanhalla is an award-winning scholar of gender and colonialism. She has demonstrated that interracial relationships are a significant aspect of colonialism and its legacy in New Zealand. Her research has shown that colonialism was intimate in scale, and on this basis she has argued for new approaches to the colonial past through attention to intimacy and emotion. She has successfully broadened understanding of how intimate relations, inclusive of affectionate bonds, sexual violence, and the emotional legacies of global war in indigenous societies, are deeply entwined with colonial policy and practice. She has approached these histories in award-winning innovative ways, combining archival research with visual and material culture and oral histories to tell new histories of New Zealand's colonial past from the perspectives of indigenous women and their communities.