When medicine and literature meet 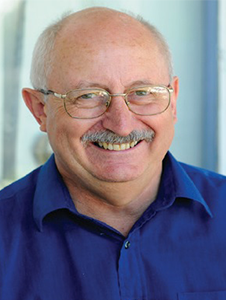 Grow old among with me!
The best is yet to be …
– Robert Browning, Rabbi Ben Ezra

Professor Dick Sainsbury has enjoyed a distinguished forty-year career as a consultant physician in geriatric medicine as well as a researcher, teacher and mentor at the University of Otago, Christchurch.

Highly respected for his wisdom, professionalism and humanity, Professor Sainsbury has now, in retirement, penned a memoir, All Experience is an Arch – a collection of writing about geriatric medicine, old people and ageing.

Graduating with his MB ChB from the University of Otago in 1972, Professor Sainsbury began his training in geriatrics in 1977, heading back to his birthplace, the United Kingdom, to advance his specialist experience. Returning to Aotearoa New Zealand in 1982, he took up a lifelong position as a consultant in geriatric medicine in Christchurch, in dual university and hospital appointments, later pursuing his love of English literature by completing an MA thesis on “Old People and Ageing in the fiction of Thomas Hardy”.

Professor Sainsbury’s book explores his practical yet empathetic ideals and views on elder care, interspersed with personal anecdotes from patients he’s cared for and learned from.

The book is divided into two sections; part one examines the ethics, conundrums and challenges of geriatric medicine; part two analyses old age through the lens of his passion for English literature. Early emphasis is placed on the importance of multidisciplinary teams in geriatric medicine, committed to the restoration of function in older people who have deconditioned.

Professor Sainsbury strongly advises families to get an EPOA (Enduring Power of Attorney) document drawn up, to better guide, protect and support the care of older relatives should their health fail. He expresses too, however, his reservations regarding “the slippery slope” of The End of Life Choice Act, having witnessed examples of old people being coerced into decisions he believes they didn’t really want.

He delves into the various ethical conundrums of geriatric medicine decision-making, such as “having to choose between the lesser of two evils” when deciding on a treatment pathway for some patients – for example, perplexing decisions over anticoagulation – which he feels have remained problematic over the course of his career, despite advances in radiology, anticoagulant and antiplatelet agents.

At heart a humanist, he advocates strongly for treatment paths supporting patient independence in old age, and the upholding of a patient's dignity, rights and freedoms. Included among these he believes, are older patients’ freedoms and rights to intimacy and sexuality.

He says he's often dealt with referrals from rest homes asking his team to “sort out” residents who are manifesting sexual behaviour, with the expectation that he and his team will simply medicate to suppress it.

“One manager rang me about an 84-year old patient of mine with Parkinson's disease. ‘Every month Jack comes to me and ask for $150 so he can visit a massage parlour. What should I do?’ ‘Tell him to wear a condom’ was the only possible answer.”

He concludes, “old people are us, not a different species, and they are entitled to the same life experiences, joy and sadness, as anybody else.”

Quality of life in old age is another key theme in the memoir. Professor Sainsbury says the majority of old people he’s met have come to terms with their mortality and fear death much less than they fear the prospect of loss of function through disability – namely because such loss of function often leads to a loss of independence and the need to move from their own home into care.

He discusses his concerns too about the ability for the hospital environment to provoke or worsen delirium, and that too often a delirious patent gets wrongly labelled with dementia; “once the label of dementia is in a person's case notes it can become coded as a diagnosis, even when it is wrong.”

Concern is expressed too for the growing use of what he terms “obscenities” in patient note taking, such as the term “social admission”, “nursing care” and “acopia” (or “not coping”) which he believes is a substitute for “I don't have to think about this patient”. He dislikes the denigrating expression “bed blockers” just as highly, and believes old people thus tagged are at risk of having their medical problems unrecognized and untreated with often disastrous results, including unnecessary death or disability.

Another meaningless expression found in medical notes, he says, is “pleasantly confused”. But, he asks the reader, is it really pleasant for the patient to be confused? “Most patients I have talked to who have recovered from delirium say how frightening it was to experience… they were really worried that this was going to be permanent and signified that they were going mad.”

He urges doctors to respect a patient's autonomy, self-governance and right to live in the community as they themselves see fit – no matter if their environs appear less than ideal, or that bystanders feel that “something ought to be done”. He believes a health professional has an ethical duty to try and enhance patient autonomy.

“I have been rung by journalists and asked to comment about these situations… it is usually said or implied that the patient was discharged inappropriately from hospital or that they shouldn't be allowed to live like this. It always comes back to the same basic questions – is the person competent to make decisions? Do they comprehend and accept the risks involved? Are they a risk to others? If the answer is yes, yes and no, then a cogent argument can be made that we can leave them to it.”

In the second half of the book Professor Sainsbury analyses old age through the perspective of English literature – how old age was perceived and written about during the eras of Thomas Hardy, Tolstoy, Dickens, Laurie Lee, George Eliot, Zola, Tennyson, Wordsworth, Yeats and T S Eliot, among others.

He examines the theme of interdependent relationships in Laurie Lee's Cider with Rosie, and how, in older couples, when one becomes unwell, it often precipitates a crisis as the other partner can no longer manage alone. He touches too on “Broken heart syndrome” where, upon the death of one partner, the other declines and dies too soon afterwards, as occurred with the deaths of Joe and Hannah Brown in the novel after both were coerced into workhouse care. He says it's entirely feasible that stress can cause such fatalities in frail older people with underlying morbidities.

Reflecting upon William Wordsworth's work, particularly references to “noble elders”, Professor Sainsbury says he's reminded of the many stoical elderly patients he has come across during his career, and how strong they've been when he's been forced to impart devastating news. One patient he remembers was told he had extensive cancer, with just a month left to live. His wife, also on the same hospital ward, was also found, 48 hours later, to have advanced malignancy. “The pair accepted the news philosophically and with great courage. Their bearing and interaction with their devastated family have remained with me to this day.”

Near the end of his memoir, Professor Sainsbury contemplates longevity in the human species and scientific aims to lengthen lifespan. In his view, rather than seeking to prolong life expectancy, it’s preferable for medical science to address some of the conditions which makes older people’s lives miserable, such as stroke, dementia and arthritis. “Compression of morbidity would appear to be a better aim than life extension for the sake of it.

The roles of modern geriatric medicine are to promote independence and enhance quality of life, rather than prolong life at all costs”.

As a final reflection, he lists what has improved in geriatric medicine over the course of his long career; stroke rehabilitation and management, delirium and dementia recognition and management, osteoporosis management and prevention; general fitness in older people; research quality and the number of advanced geriatric trainee positions.

However, he sees many future challenges remaining, such as challenges in managing the growing population of the “oldest old”; combatting loneliness and isolation; the need for further research into common geriatric ailments; and advanced end-of-life planning, to name a few.

Old age hath yet his honour and his toil;
Death closes all; but something ere the end,
Some work of noble note, may yet be done.
– Alfred Tennyson’s Ulysses.