If these walls could talk: bricks at Christchurch campus project site tell stories of city’s past 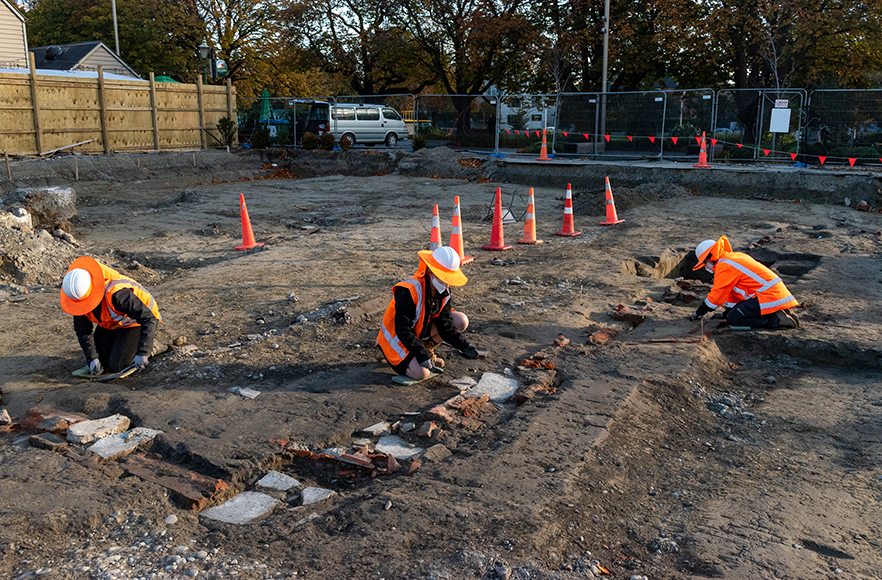 University of Otago archaeologists at work earlier this year.

As the University of Otago Christchurch campus redevelopment prepares to rise from the ground, academics in Dunedin are cleaning the dirt from 150-year-old artefacts dug up from the site.

Southern Pacific Archaeological Research (SPAR) Archaeologist Tristan Russell is excited about the work that lies ahead.

“Exactly how these features relate to one another, as well as the possible date ranges for deposition are questions that the artefact analysis aims to address.”

He says the project area has a long history of occupation and SPAR was charged with the job of digging deeper into the ground before any project work could begin.

New Zealand law requires archaeological investigation to be carried out before any major building work can begin on sites occupied prior to 1900.

“The area around the Ōtākaro (Avon River) was an important mahinga kai (food gathering place), utilised by Ngāi Tahu over hundreds of years,” Mr Russell says.

“European occupation of the land is recorded since at least 1854 and included the site of a historically significant early Christchurch institution, the Christchurch Ladies’ School, within Avon House.

“The 1854 deed also suggests that two earlier buildings were present on the northwest portion of the project area prior to Avon House. These buildings would be among the earliest established in Christchurch. Other structures are shown on early survey plans including a stable, possible outhouses and brick buildings of unknown function.”

As well as the brick building along the Tuam St site boundary, archaeologists are returning to the Dunedin lab with treasures to analyse from numerous archaeological rubbish pits, a possible corrugated iron fence-line that is likely to have been an early property boundary, post-holes, basalt foundations and a large rubbish deposit that may be associated with Avon House.

“Features such as maker's marks on ceramic vessels, forms of glass bottles and embossing, as well as stamped marks on hand-made bricks, can all be linked to specific periods of manufacture and use, which will be used to develop a narrative of the European-influenced history of the site.”

Mr Russell says some of the artefacts and features found in the ground could be linked to individuals or institutions such as the Christchurch Ladies’ School and tell the city important stories of its past.

“These connections can form narratives that can shed light on early European occupation of the site, as well as inform themes such as gender, status, foodways and lifeways.

“While no archaeological evidence relating to Māori activities prior to the European settlement of the area has been encountered thus far, any evidence would be of significant historical importance.”

The University of Otago is building a new building on Oxford Terrace as part of its $220-million-plus Christchurch Campus Redevelopment Project.

An archaeological authority was granted by Heritage New Zealand Pouhere Taonga after the archaeological investigation was completed to its satisfaction.

Earthworks for the project prior to construction, starting this week, include a 6m-deep excavation of the basement area across much of the property.

The Christchurch Campus Redevelopment is the largest project in the University’s 153-year history.

Plans to construct a new state-of-the art building to grow the Christchurch campus to position it at the forefront of international health research and teaching were announced in 2018.