Research from the Laboratory for Cell and Protein Regulation 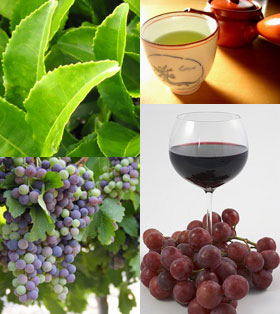 We are investigating the links between cancer and diet.

Compounds include epigallocatechin-3-gallate (EGCG) that is found in green tea, and 3,4′,5-trihydroxystilbene (which is also called ‘resveratrol’) that is found on the skins of grapes and berries and found in red wine.

Grapes and red wine which contain resveratrol. White wine is usually made without the grape skin included and so has lower levels of resveratrol. (James Dann)

The development of endometrial and ovarian cancers are influenced by a number of factors including the three dimensional environment (3D).

We have shown that unanchored spheroids exhibit distinct responses to drugs.

The pictures show that cells of different grades of endometrial cancers interact with each other in distinct ways. Low grade tumours (Ishikawa) form a lumen inside a cluster, whereas that does not occur in high grade tumours (EN-1078D). (Kenny Chitcholtan)

LHS. Cells (dark red) were grown on surfaces that were imprinted moulds (visibly featured areas) of previous, non-confluent cultures. It is clear that the growing cells (blue arrows) prefer areas with the Bioimprint.
RHS Cells that grow on the Bioimprinted areas have a different morphology to those that grow between areas (yellow arrow). (Lynn Murray and Volker Nock)

Our work is demonstrating that the substrate features alter cell behaviour. The physical microenvironment and the associated mechanical forces are important in cell functioning. Such forces are exerted by both neighbouring cells and the substrate topography.

This work is being undertaken in collaboration with the nanotechnology group, University of Canterbury, of the MacDiarmid Institute, a Centre of Research Excellence. Cell characteristics, which include morphology and gene expression, are dependent on the biomechanical forces that act on a cell.

Our group is in the unique and internationally advantageous position of being able to engineer an authentic topological environment for a cell by employing our Bioimprint technique in which biological cells are exactly replicated as a biocompatible polymer mould.

Our group is investigating how characteristics of cancer cells are modulated by their physical environment.

The receptive uterus (the Window of Implantation)

A heat map of RNA expression in the endometria of a group of women - there are clear differences between different types of cells that have been carefully separated by laser microdissection – the endometrium has specialised areas ready to accept a fertilised egg so a pregnancy can develop. (Gloria Evans)

A receptive uterus is essential for blastocyst attachment at the Window of Implantation.
In collaboration with ReproMed a study is being undertaken on gene expression in the uterus during the time of implantation. Differences in expression in the glandular epithelium, lumen and stroma have been established.

Protein expression in fertile women and women with repeated implantation failure (RIF) is being studied.

Picture: Expression of two proteins in in fertile women and women with RIF

Our focus in collaborative studies is the pituitary gland and its relationship to the hypothalamus.

The laboratory is a member of the Centre for Neuroendocrinology. We have studied the control of gonadotrophins, LH and FSH, by peptides at the pituitary.

Regulating LH and/or FSH using peptides could produce new methods of female, and perhaps male, contraception or for treating infertility.

We hypothesise that there is a co-operative network of agents that modulates LH levels, and that several peptides (GnRH and others in the hypothalamus) have crucial, but distinct, roles at the pituitary.