The Role of Fenestrae

Our interest has focused upon the role played by the fenestrae in the walls of the liver sinusoids. In other words, what is the function of these pores?

We have proposed that the Liver Sinusoidal Endothelial Cell (LSEC) with its pores functions as a sieve to allow passage of particles less than 100nm in diameter from the blood, while preventing larger particles such as blood cells from contacting the hepatocytes. Among the materials sieved by the liver, is a group of particles called chylomicrons.

Chylomicrons are nanospheres of lipids with proteins on their surface, produced by the intestine from fats in the diet.

They also contain triglyceride, cholesteryl, retinyl esters and Vitamin E in their core. The surface apoproteins of the chylomicron act as signals to determine the fate of the fats and other materials.

Chylomicrons are released into the lymph system by the intestinal cells and are carried in the lymph, to the thoracic duct where they pass into the circulation. As chylomicrons circulate in the blood, enzymes gradually remove the fat, and the proteins are removed or changed. This results in a diminution of the size of the chylomicron from around 1000 nm to 80 nm. This smaller particle is called a chylomicron remnant which is rich in cholesterol. When the remnants enter the hepatocytes they inhibit cholesterol synthesis, thus cholesterol homeostasis is preserved

The sieving effect of the fenestrae and endothelium means that large chylomicrons are kept in circulation until they have lost most of their lipid. Once they become small enough they can pass through the fenestrae to contact the hepatocytes, where they are recognised by receptors and ingested.

If the remnants are prevented from reaching the hepatocytes then they will accumulate in the circulation. This carries some risks as high levels of circulating cholesterol and lipids can lead to cholesterol deposition on blood vessel walls (hardening of the arteries, or atherosclerosis). Therefore loss of these pores can result in increased risks of both stroke and ischaemic heart disease, especially since cholesterol derived from the liver increases in the low density lipoproteins (bad cholesterol).

We and others have shown that the number and size of fenestrae are decreased in many liver diseases. We have seen that this decrease inhibits the uptake of chylomicron remnants in heavy alcohol abusers and we have described high circulating fats and cholesterol in patients with few pores (low porosity).

One of the questions commonly asked is is the process reversible? So when one of our students (Bernard Tamba-Lebbie) posed this question to us, we immediately set him the task of finding this out. We were able to show that when defenestration occurs acutely, it is indeed reversible. We would predict however that after long or chronic abuse, the loss of fenestrae would be difficult if not impossible to reverse. 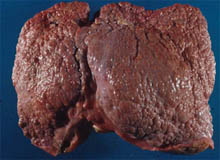 The defenestration leads to a block in the liver uptake of vitamins in chylomicron remnants which in turn may activate fibrosis around the sinusoids. The perfect lobular architecture is now lost, hepatic function compromised and cirrhosis has occurred. Multiple insults ranging from alcohol excess, viruses and auto immune diseases may trigger defenistration and cirrhosis

Since 2001 we have collaborated with David Le Couteur's group in Sydney. They have shown that defenestration occurs in old age and diabetes (type 2) leading to hypertriglyceridaemia.

The Role of Vitamin A

As Vitamin A is carried in the core of the chylomicron remnant, loss of the fenestrae (or defenestration) also blocks the hepatic uptake of Vitamin A. We have shown this effect by tracing radiolabelled vitamin A into the liver. There is increasing evidence that the stellate Ito cells in the liver, which normally store Vitamin A, will produce collagen (the principal component of liver scar tissue) when depleted of Vitamin A. We have hypothesised that defenestration is one of the first events in liver disease that initiates fibrosis (scarring of the liver).

Determination of the presence or absence of fenestrae requires removal of a portion of the liver, (a liver biopsy) which involves some risk to the patient. When the fenestrae are smaller and fewer, the exchange of materials between the liver and the blood is slowed. 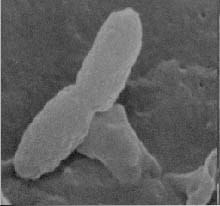 Endotoxin is a complex molecule synthesised by a wide range of bacteria and incorporated in their cell coat. When bacteria die or divide, endotoxin is released. Animals respond rapidly to this toxin, with fever and production of bacterial killing agents.

Normally some endotoxin, from bacteria in the gut, passes into the blood stream. However the liver (as it is the first organ to receive blood from the gut) rapidly removes any endotoxin.

In fact, the Kupffer cells in the liver are specially designed to modify endotoxin and unlike other macrophages in the body, do not react as violently to its presence.

We have shown that high levels of endotoxin cause defenestration of liver sinusoidal cells.

Professor David Le Couteur's group have discovered that the ageing liver, (like those in younger people who smoke and drink to excess) defenestrates and become hypoxic. This pseudocapillarization of liver sinusoids, they believe, alters its ability to process cholesterol and fat soluble vitamins, alters apolipoprotein metabolism and so plays a role in the pathogenesis of Atheroscleroses, Osteoperosis, Diabetes, Hepatic Fibrosis and even Carcinogenesis.

The Liver sieve and immunity/tolerance

The loss of fenstrae as occurs in cirrhosis etc by blocking the talk between circulating lymphocytes and hepatocytes may lead to a lack of tolerance and rejection of new genes from viral vectors implanted in the liver (see Blood 101: 338-3339, 2003).