Ageing with a spinal cord injury in New Zealand

Worldwide there is a new demographic phenomenon: an increasing number of people who either are born with or sustained a physical disability when young or in middle-age and who are now ageing with their disability. Spinal cord injury (SCI), whether sustained through injury or as a consequence of a medical condition, often results in life changing consequences. Previously, those with SCI had reduced life expectancy, and increased mortality and morbidity compared to their non-injured counterparts. However, in more recent times, the majority of people with SCI can, with appropriate care and support, expect to live an “almost normal” lifespan. Once regarded as a relatively stable condition, SCI is now recognised as being changeable over the life-course. This is the first study undertaken in New Zealand (NZ) specifically investigating people ageing with SCI.

The aim of the thesis has been to redress an information deficit and develop a better understanding of the health, living circumstances and quality of life (QOL) of people ageing with SCI in NZ.

The research study used a mixed methods research approach using sequential methodology, with an exploratory qualitative phase (Phase 1) followed by the establishment of the SCI population in NZ (Phase 2) and a cross-sectional survey (Phase 3) of this population.
Phase 1 comprised a thematic analysis of in-depth interviews with 12 people who had lived with SCI for a minimum of 25 years. With the assistance of the two spinal units in NZ, Phase 2 established a database which included contact details of 1174 people who had incurred their SCI before January 1990. Potential participants were then invited to participate in Phase 3, a national cross-sectional survey.

Phase 1 findings supported many of the conclusions from international research relating to ageing with SCI, yet provided additional insights into issues facing people who had lived with SCI for a prolonged period in NZ. All those interviewed had lived unique, full, active lives, often making major contributions to society. Specific issues identified included differences in funding between Ministry of Health and ACC, individual health status, living circumstances and QOL.

Surprisingly, during Phase 2, it became clear that the actual number of people ageing with SCI in NZ was unknown to health and other authorities, with many more people populating the database than anticipated. This raised questions about the effectiveness of health information systems and whether the needs of this group were under estimated and under resourced.

Phase 3, which comprised of a consenting sample of 284 people, provided a clear health and socio-demographic profile of people ageing with SCI before 1 January 1990 in NZ. Establishing significant differences in the health and employment circumstances between participants who receive support from Ministry of Health and ACC was complex, with a number receiving funding for care and support from more than one source. Common health problems reported were high blood pressure or hypertension, arthritis or rheumatism, kidney or urinary tract conditions, hearing impairment, and bowel disorders. Participants maintained good social support networks and community involvement when compared to able-bodied people of a similar age. Time since injury was not significantly related to rated standard of living, satisfaction with standard of living, or the income meeting current needs. Injury level was, however, ‘paradoxically’ significant with tetraplegics almost four times and paraplegics twice as likely to rate standard of living high or fairly high compared to people with SCI who were walking.

The research uncovered a ‘hidden population’ of people ageing with SCI, with many more people identified than anticipated by everyone involved. The need to put the database together, together with the technical issues associated with achieving this, reinforced the necessity for NZ to have a well-managed national SCI register. Most people ageing with SCI were living full, active lives and contributing to the community. Many participants, especially tetraplegics, rated standard and satisfaction of living high, adding support for the ‘disability paradox’. NZ medical and social support services will need to respond to changing demographic trends with an increasing number of people ageing with SCI likely to present with a range of complex interwoven secondary conditions. People age whether they are disabled or not and experience health conditions that affect their life-course, making each individual’s life journey unique. 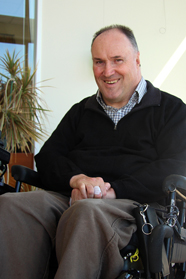