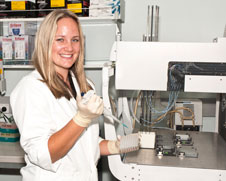 “If you think of a chromosome as a shoelace, the telomere is like the protective plastic cap on the end, ‘’ says geneticist Sarah Jodczyk.

Sarah’s analogy might be simplistic but understanding what a telomere does in our bodies and its capacity for predicting health outcomes is complex and potentially of huge significance.

Telomere length is an area of intense interest internationally with many people studying telomeres and their contributing role in health and disease since Elizabeth Blackburn was awarded a Nobel Prize for her work in this area in 2009.

“It is now understood that telomere length decreases with ageing and there is a growing body of evidence to suggest that cumulative lifetime stresses also contribute to shortening of the telomere length. It has been suggested that in the future there could be personalised tests of telomere length to show how long people will live and their susceptibility to disease,’’ Sarah says.

Sarah is part of the University of Otago’s Christchurch (UOC) Gene Structure and Function Laboratory. Her thesis involves looking at how telomere length differs in individuals with different stresses and disease. Specifically, she is studying the telomere lengths of a variety of groups such as those who have suffered maltreatment or adversities as children. She has also looked at the telomere lengths of members of a new UOC longitudinal study of people aged over 50 to assess the value of telomere length as a predictor of overall health status.

Sarah started studying at the UOC one day before a devastating earthquake struck the city killing 185 people and closing hundreds of buildings including the one in which her laboratory was situated. Despite this shaky start, Sarah only had to put her studies on hold for a month as her supervisor and pathology department staff worked tirelessly to find her and her fellow students an alternative work place. This was no mean feat in a city which two and a half years later is only just entering recovery mode.

Sarah says the level of support she has received from her department has been overwhelming. “Everyone helps you out so much. The people make doing the thesis easy.’’ Because of the support she receives and the range of exciting health science research being undertaken she has never regretted her decision to study at the University of Otago’s Christchurch campus.