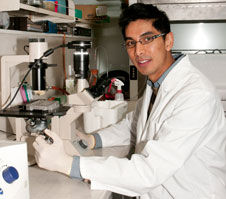 Abel Ang had heard New Zealanders were friendly but was unprepared for just how willing to help other researchers at the University of Otago, Christchurch, turned out to be.

“I came to Christchurch not knowing a lot about the place but now I have only good things to say. The Christchurch campus is totally committed to research and any researcher, whether a Professor or a fellow student, will help you whether you are in their research group or not. You only have to ask. I have been amazed by the friendliness and caring nature of people here.’’

Ang is undertaking a PhD under the supervision of Professor Madhav Bhatia, with the Inflammation Research Group. He came to Christchurch after working and studying in Singapore and the United States.

Inflammation of the pancreas or pancreatitis is an autoinflammatory disease that starts in the pancreas and could potentially spread to the whole body if left unresolved. This model provides a unique perspective into the body's immune mechanism particularly when it is over activated and causes harm instead of good.

One of the major enzymes for making hydrogen sulphide is CSE and Ang is studying what effect this has when it or isn’t present in the body.