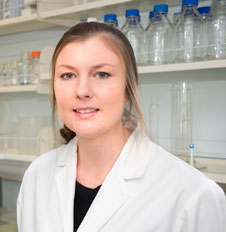 A Summer Studentship project at the University of Otago, Christchurch, opened up a world of opportunity for Teagan Hoskin – including a research job in London and a clinically-focused PhD.

As a newly-graduated sciences student, Teagan discovered the Christchurch campus’ wide range of Summer Studentship options. She did a summer project with the Mackenzie Cancer Research Group. She then earned a Bachelor of Biomedical Sciences with Honours at the Christchurch campus, while working as a research assistant for gastroenterologist and researcher Professor Richard Gearry.

Through Professor Gearry’s contacts, Teagan then got a job at St Thomas’ Hospital in London. This role involved recruiting patients into a large genetic study.

“I feel very lucky to have learned about the University of Otago, Christchurch. I was put in touch with a contact of Richard’s in London and this helped me to secure a job over there. The laboratory and research work I had done as part of the Summer Studentship and honours course allowed me to gain many skills that directly applied to this role.”

Teagan returned home to Christchurch after two years in London, and is now undertaking a PhD with the Centre for Free Radical Research.

She is investigating calprotectin, an abundant protein found in neutrophils. Neutrophils are a common type of white blood cell that help to fight infection, particularly those caused by bacteria. Calprotectin is routinely used as a marker of inflammation in patients with inflammatory bowel disease. She wants to assess whether oxidation of calprotectin occurs at sites of inflammation and infection, and subsequently affects its biological function.

Teagan enjoys the welcoming environment of the Christchurch campus, where supervisors and other senior scientists are readily available and happy to answer questions. She is being supervised by Professor Tony Kettle, Professor Richard Gearry, Professor Andrew Day and Dr Nina Dickerhof.