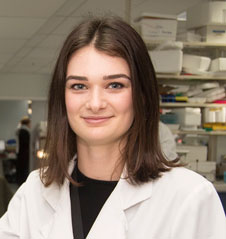 Her father’s battle with colorectal cancer inspired Bailey Kennedy to pursue a career in medical research. So she was thrilled she could do her PhD at the University of Otago, Christchurch, and live close to him and the rest of her family.

Bailey is undertaking a PhD with the Mackenzie Cancer Research Group. She is working on refining a newly-developed, immunology-based score to better predict the stage of a patient’s cancer and their chance of survival.

When Bailey was in her first year at high school, her father was diagnosed with colorectal cancer. He underwent several months of chemotherapy, radiation and surgery. He has now been disease-free for eight years.

“I was very lucky that Dad went to the doctor as soon as he had symptoms and they picked up the cancer straight away. His experience, and the discovery that a lot of extended family members have had bowel cancer, inspired me to get into cancer research.”

Bailey did her undergraduate science degree at the University of Otago’s Dunedin campus. It was there she met Dr Roslyn Kemp, who studies immunology and cancer, and would later become one her PhD supervisors.

“I grew up in Christchurch and really wanted to come home to do my postgraduate study. I did some research and was happy to find out I could do a PhD at the Christchurch campus of the University of Otago, and that they have a research group that specialises in cancer.’’

Bailey’s PhD project involves measuring numbers of neutrophils, the most common type of white blood cell, in colorectal cancer tumours. She will compare the prevalence of tumour neutrophils to patient survival rates to determine if there is a relationship between the white blood cells and patient outcome. She hopes her work might form one part of a newly developed ‘immune score’ being tested as a way to more accurately grade the seriousness of a patient’s cancer.

She says some of the many benefits of doing her PhD in Christchurch have been easy access to tumour samples from the Cancer Society’s Tissue Bank (which is hosted by the University of Otago, Christchurch) and regular meetings with oncologists from the neighbouring hospital.

Bailey is being supervised by Dr Kemp from Dunedin and Dr Margaret Currie from Christchurch’s Mackenzie Cancer Research Group.