Professor Peter Kuch, the inaugural Eamon Cleary Professor of Irish Studies, has retired from the position he has held since 2006. 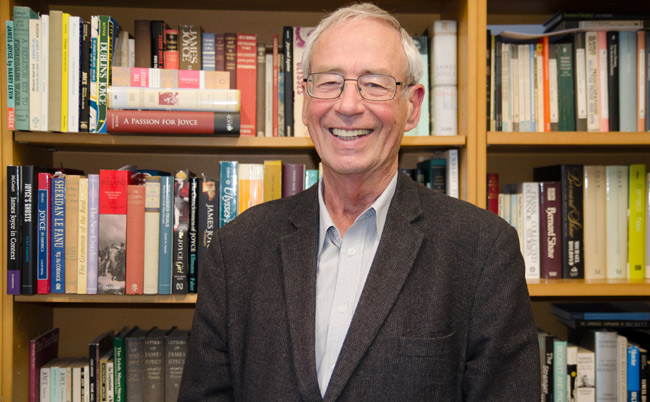 Professor Kuch, who is a Co-Director of the University of Otago’s Centre for Irish and Scottish Studies, says he has loved teaching undergraduate students but is particularly proud of the Otago graduates and the graduates from Ireland, Australia, Canada, America and other New Zealand Universities who have chosen to study for postgraduate degrees with him.

“All have given papers at international conferences; all have graduated, some with distinction; all have published, articles, book chapters or monographs; and some now hold university posts. And what is especially rewarding, is that all of them have kept in contact,” he says.

He has also enjoyed public engagement and discussing Irish literature and culture at numerous speaking events and conferences, including 'Yet no clear fact to be discerned': The New Zealand response to the 1916 Easter Rising, which was held in Dunedin in 2016.

In recognition of his teaching, his service to the University and the community and his internationally recognised scholarship, the University has granted him the status of Emeritus Professor Irish Studies.

"All have given papers at international conferences; all have graduated, some with distinction; all have published, articles, book chapters or monographs; and some now hold university posts. And what is especially rewarding, is that all of them have kept in contact."

The establishment of his position – following an endowment from the Eamon Cleary Trust – meant Otago is the only university in Australasia that offers an undergraduate minor in Irish Studies.

“He has been very active internationally and very good ambassador for both the University and Irish Studies.

“I have been delighted to see the very warm reception of his book on Joyce and divorce. It is nice to think of that book as an enduring marker of his time at Otago,” Professor Ballantyne says.

His most recent book, Irish Divorce/Joyce's Ulysses (2017) was critically acclaimed for not only recovering a lost history of Irish divorce, but also changing the way the novel is read.

The book was prompted by the thoughts about divorce contemplated by Joyce’s two main characters in Ulysses, Molly and Leopold Bloom, as a consequence of Molly’s adultery.

“These thoughts have traditionally been dismissed as fantasy. My research has shown, as I long suspected, that it was possible for the Blooms to be freed ‘from the bonds of marriage’, even though they were living in a Catholic country that sanctioned separation but prohibited divorce unless obtained by a private Act of Parliament.

"He has been very active internationally and very good ambassador for both the University and Irish Studies."

“However, it was possible for Irish couples between 1857 and 1922, having established English domicile, to petition the English court and obtain a divorce that permitted remarriage. Furthermore, there is abundant evidence that Irish couples obtained decrees absolute, despite repeated claims that the Irish did not divorce.”

He argues that “Church and State, committed as they were to an image of Holy Ireland, successfully expunged Irish divorce from 20th century Irish life”.

Professor Kuch is also a commissioning editor for the Irish Studies Review (Routledge) and is on the Editorial Board of several journals.

He holds an honours degree from the University of Wales and an M.Litt and D.Phil from Oxford, where he studied with Richard Ellmann and John Kelly.

Professor Kuch is currently engaged in writing a cultural history of the performance of Irish theatre in New Zealand and Australia and is the representative for those countries on the international organising committee of the Irish Theatrical Diaspora Project.