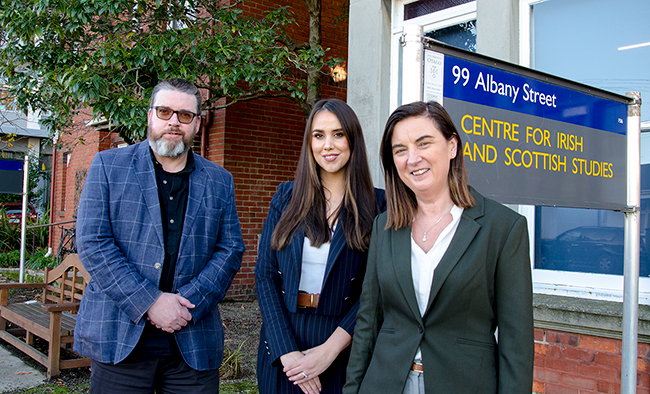 The University of Otago again provided a focal point for discussion on the close bonds between Aotearoa New Zealand, Scotland and Ireland last week during a visit by Faran Foley, the Deputy Head of Mission of the Embassy of Ireland to New Zealand and Samoa.

During a Dunedin campus visit on 2 June – hosted by Otago’s Centre for Irish and Scottish Studies – Foley met with students to discuss New Zealand’s relationship with Ireland.

Eamon Cleary Chair of Irish Studies Professor Sonja Tiernan said discussion included Ireland’s position in the European Union. Students were interested to learn more about Ireland and New Zealand’s close working relationship on human rights issues and commitment to the United Nations. It was particularly interesting for the students to learn more about the position of women in diplomatic relations from a successful young female diplomat. The students were particularly inspired by Foley and presented her with a card of thanks.

“Foley’s visit highlights the continuing value of our relationship with the Irish Embassy, and the interest our students and the wider public have in the subjects our joint-ventures explore. While many New Zealanders have a shared heritage with Scotland and Ireland we wanted to show the way Northern Hemisphere nations of a similar size respond to global issues is relevant to New Zealand, and can inform our worldview.”

Also on 2 June, Foley was the guest of honour at the “Small Nations: Independence and Interconnections” public discussion on possible future directions for Scotland, Ireland and New Zealand. Foley was formally welcomed at the event by Dr Royden Somerville QC (Ngāi Tahu, below, standing at right), Chancellor of the University of Otago, who also contributed to the engaging discussion.

Drawing on her experience in international human rights law and her work in the NGO sector, Foley gave insights into how current events have reignited discussion about possible future directions for Ireland.

Discussion turned to the recent Scottish general election (in which the Scottish National Party secured victory, taking 62 of the 73 constituency seats), the resulting pro-independence majority in the Scottish Parliament, and the potential for Scottish First Minister Nicola Sturgeon to call for a another independence referendum.

Foley and panellists also discussed the UK leaving the EU and the agreement of the Northern Ireland Protocol, and how Ireland has stood firm in its commitment to the EU and multilateralism. In January 2021, Ireland took its seat on the UN Security Council where the small nation has been committed in maintaining an independent and trustworthy voice.

Local perspectives were also covered by Hayward and Godfrey, including the push to decolonise New Zealand in the wake of the Black Lives Matter movement, and how the death of HRH Prince Phillip in April has prompted renewed consideration about the constitutional arrangements of Aotearoa New Zealand. There included interesting perspectives on current political affairs in Samoa and environmental politics in New Zealand.

The visit continues the Centre’s strong relationship with the Embassy; in 2019 the Irish Ambassador to New Zealand and Samoa, His Excellency Peter Ryan, visited the Centre and attended civic events in Dunedin with business leaders.

The Embassy also commissioned research by Professor Tiernan that provided the first Irish citizen mapping project to cover an entire country. The report, Irish in Aotearoa: Mapping the Irish community and people of Irish heritage in New Zealand, was launched in Dunedin and at Parliament in Wellington in early 2021. Ambassador Ryan was the guest of honour at an alumni reception at Otago’s Dunedin campus in January this year to celebrate the launch of this report.

About: Faran Foley is the first resident Deputy Head of Mission of the Embassy of Ireland to New Zealand and Samoa. With a background in international human rights law, Faran worked for several years in the NGO sector where she focussed on issues relating to breaches of human rights norms. She joined the foreign service in 2018 and was posted to Aotearoa New Zealand in 2019. 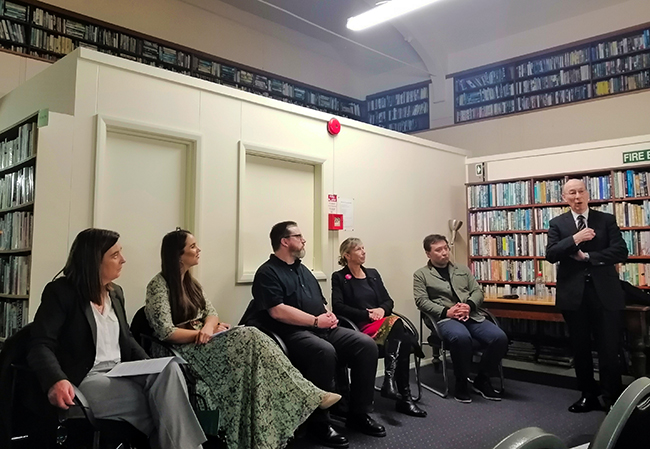