A special relationship with Otago Museum offers exciting opportunities for research and study in the Classics programme. 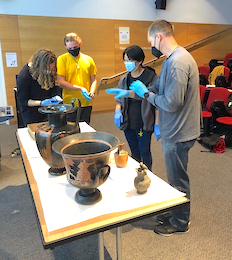 Otago Museum possesses the finest collection of ancient Greek vases and Roman coins in New Zealand. The wider Classics collection includes pottery, coins, metals, and glass from the cultures of the ancient Mediterranean. It also includes replicas of iconic objects and statues.

More about studying and research in Classics

Working with the Museum the Classics Programme can arrange for Humanities internships (HUMS 301 and HUMS 401) focusing on aspects of the Museum's Classical collection. Projects involve a combination of research, documentation (photography, data entry, etc.), and writing, sometimes with a public focus.

These internships have greatly contributed to the Museum’s efforts at digitising the collections and updating the collection database. Through this collaboration with the Otago Museum, Classics interns have been able to gain hands-on experience working with Greek and Roman coins, ancient glass, Roman pottery, and a range of terracotta and metal figurines from the ancient Mediterranean world.

Many of our students are working with the Otago Museum Roman coin collection as part of their coursework at the 300- and 400-level. The coins cover the period from the third century BC to the fifth century AD. In Australasia this collection is second only to Macquarie University, Sydney.

The expertise of Classics staff is also enhancing the coin collections through cataloguing, digital capture, dissemination of research, and the development of teaching approaches.

Dr Gwynaeth McIntyre, Head of Programme, and Dr Dan Osland have been working on a number of projects associated with digitising and cataloguing the Greek and Roman coin collections. Digitisation of the Roman coin collection was generously funded through a University of Otago Research Grant. Division of Humanities interns began digitising the Greek coin collection in 2021, they had been previously catalogued by a former Classics faculty member, and Otago Museum Honorary Curator, Dr Chris Ehrhardt.

Using a University Teaching Development grant (CALT) Dr Gwynaeth McIntyre has enabled students to create coin online exhibitions and posters as part of their course work. Gwynaeth's paper on this group work was published in the Journal of Classics Teaching. 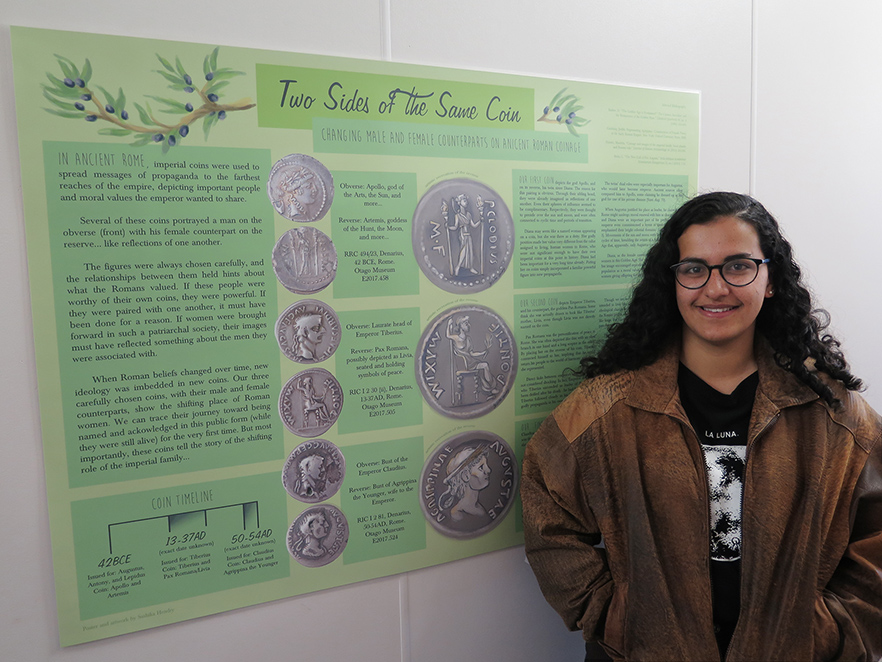 CLAS 344 From Augustus to Nero: Scandal and Intrigue in Imperial Rome students created:

How to read a coin

Student exhibitions: Anatomy of a coin

Honours student Joanne Jones conducted a review of the Romano-British pottery collection. "As a budding archaeologist, the thought of being able to handle such a large collection of 2000-year-old artefacts was very exciting."

As part of her research she examined each piece of origin information from every artefact in the collection.  "From the form, material, and decoration styles of each artefact, I was able to both eliminate any artefact that had been mislabelled as being Romano-British in origin and begin to quantify the collection."

From left: Dr Gwynaeth McIntyre and Andy MacManus with artefacts from the Roman glass collection.

Masters' candidate Andy MacManus studied Roman glass. Andy's research aims to understand the modern journey of these items prior to their acquisition by the Museum and the original contexts and uses.

Classics postgraduate students and their research

Greek vases on display in the People of the World gallery at Otago Museum.

Members of the public can also view many of these treasures in the People of the World Gallery, Level two, at the Otago Museum.

More about the People of the World Exhibit at Otago Museum

This online selections showcases some of the mythological narratives discussed in the University of Otago Department of Classics’ paper Greek Mythology. The Otago Museum possesses the finest collection of ancient Greek vases in New Zealand, and the online selection represents a small fraction of those that are currently on display.

CLAS 108: Classical Art and Archaeology: Of Heroes, Gods and Men

This small set of pottery was chosen as a schematic representation of some of the vessels that would have been used in a typical Athenian symposium. The symposium was an aristocratic drinking party traditionally attended by (male) citizens, and served as a setting in which to reinforce group solidarity and to enhance social standing.

CLAS 108: Classical Art and Archaeology: Of Heroes, Gods and Men

CLAS 354: Tales of Troy: From Homer to Hollywood

Many scholars today do believe that there are grains of historicity scattered throughout the Iliad and the Odyssey, and that later written and artistic depictions of the Trojan War can be helpful in better understanding the context of this early encounter between East and West. The diverse materials in this online collection contribute to that exploration.

CLAS 345: Tales of Troy: From Homer to Hollywood