Growing up in the Canterbury high country, Pat was a farm kid who read Homer.

Aspects of what I learnt studying Classics, such as ancient manufacturing methods and materials, are useful to my work as a Conservator as we have to understand how an object was made and from what before we can treat it.

"Personally, I love the politics, the intrigue, the murder and mayhem of the Roman imperial period."

Beyond the written and verbal skills a Classics degree endows you with, it makes you open-minded and able to interact freely, courteously and civilly with all types of different people.

Joel began university by studying Music performance with an eye on training as a high school music teacher but, having added a BA to complement this study, quickly realised his passion for studying Classics and the ancient world. 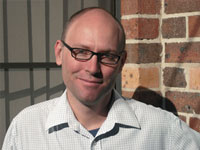 Undertaking a PhD in an area with few job prospects was both a help and a hindrance for Paul Roche.

“Video games are full of Spartans. Hercules and Xena have their own TV shows. They are great characters and great stories.”

"I decided to make Classics my major at Otago because it combines everything I am interested in: literature, history, languages, art, and mythology as well as architecture and archaeology."