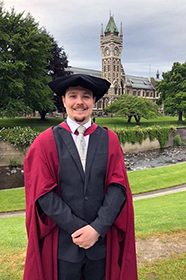 Joel began university by studying Music performance with an eye on training as a high school music teacher but, having added a BA to complement this study, quickly realised his passion for studying Classics and the ancient world.

He has recently completed his PhD in Classics at Otago with a thesis that explores ancient conceptions of the underworld in literature and myth. During his time at Otago he also produced several publications stemming from his other major research interest: the reception of the ancient world in popular culture.

“I find the ancient world so fascinating. One of my research passions is exploring the ways in which we in the modern world think about it. The way we represent it in movies, comics, and gaming, for example, often speaks more about our own socio-cultural assumptions than antiquity itself.”

Joel now works as an administrator in the PBRF and Publications office at the University of Otago and credits his studies with having helped develop many of the skills that his job requires.

“The ability to read, comprehend, and evaluate the documents that come across my desk in a quick and accurate manner is an essential to my job. The nature of studying classics, with its focus on critically reading both ancient and modern texts, has been pivotal for being able to do this well.”

While his studies have not led to an academic appointment, Joel is confident that completing his PhD was not only a significant personal achievement but also a thoroughly practical one. He is adamant that, if he had his time over, he would do it again without hesitation.

“I was able to partake in some truly remarkable experiences during my time at Otago, including publishing book chapters, journal articles and even mingling with world-class academics in my field at the University of Cambridge during a conference there.”

When reflecting upon his time at Otago, Joel emphasizes the support of the staff as a particular highlight.

“Not only are the staff world-class teachers and researchers, but it was their genuine interest in me as a person that made all the difference. One of my fondest memories is how they threw a baby-shower for my wife and I when we found out, right in the middle of my PhD, that we were expecting a baby. Their support helped release a lot of the tension from what could have been a very stressful and taxing time.”