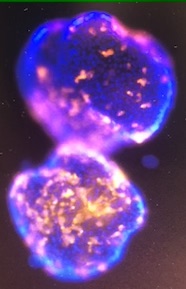 An organoid is a miniature version of an organ that can be grown in a laboratory. As they are 3D structures, and contain most of the cell types found in the original tissue, organoids are a better model system than cells grown under the 2D growth conditions that are normally used in laboratories.

The Cancer Genetics group’s research focuses on stomach (gastric) cancer, so we are growing organoids derived from the stomachs of mice. These miniature-stomachs can be grown hundreds at a time. We can use these organoids to test multiple potential treatments at once, and can make an initial assessment of their efficacy in a matter of days. This drastically reduces the time and costs involved with performing these kinds of experiments.

We have constructed cells that contain a controllable switch. When we use a specific compound to ‘flick the switch’, the mutation is activated. In some cases, we can also use the switch to turn on a fluorescent reporter protein. This allows us to quickly and easily see which cells are carrying the mutation of interest as they turn red.

We can control both CDH1 and TP53 so that we can work on both early and late stage gastric cancer-like organoids.