James undertook his masters research in the Cancer Genetics group. He is now doing research on kava DNA in Vanuatu.

An interview with James during his masters research

James Frick's research, for his master's degree, is looking at synthetic lethal interactions between the CDH1 gene and various cytoskeletal genes. The loss of the CDH1 gene is a common event in the initiation of gastric, breast and colorectal cancers. In the progression of cancers, the loss of CDH1 is associated with a transition to a more aggressive cancer.

James is focusing in on one gene, the microtubule-associated kinase (MAST2). The goal is to cause selective cell death in the cancer by manipulating MAST2.

He works with tissue cell cultures derived from breast cancer. The aim is for the cells to take up DNA constructs which inhibits MAST2 expression, which will then cause them to die off.

“Everything we do is novel, what differs from undergraduate work is that we’re not aiming for expected results.”

Working in the Cancer Genetics Lab requires many skills. Aseptic techniques are really important for working with tissue cell cultures, due to the risk of contamination. You have to be a good time manager too and keep up with the literature.

“It’s really helps having a great team around you; everyone is so helpful and approachable.”

Family and science come together

James has a personal connection to cancer on his mother's side. Four members of his family have had a diagnosis.

James grew up in Hamilton and was always into living things, nature, and science. A family collection of animal bones and a cousin in marine science, provided him with varied scientific interests.

James loved science in secondary school. It was a genetic engineering project on transgenesis and xenotransplantation that particularly captured his imagination. This lead him to a molecular biotechnology degree. His original plan was to feed the world using biotechnology.

At this early stage in his career James would like to continue to do research in either an academic or industrial environment. When he’s not in the lab he enjoys longboarding and maintaining a sustainable existence. He continues to be in awe of nature:

"While the pursuit of synthetic molecules is fruitful, I think that what already exists in our flora and fauna is under-explored." 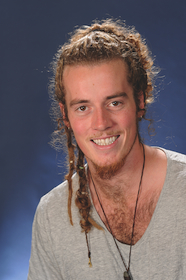