Preventing families from going through heart-break

Tom started his master's project in the Cancer Genetics lab in 2013. And following a couple of years working at Pacific Edge Ltd, he returned to undertake his PhD.

His keen interest in human health, particularly cancer, combined with the opportunity to focus on paediatric brain cancer was a great fit for Tom's master's project.

Current cancer treatment causes the majority of children to have severe side effects and often leads to long-term physical and mental impairments.

Having seen a friend’s young brother battle leukaemia, Tom decided he wasn’t going to be a paleontologist after all.

"It’s hard to see someone go through that. Especially at such a young and innocent age. Luckily he recovered, but I’d like to be involved in preventing other families going through this."

With a radiologist for a Dad, and a teacher, Mr Burt, using water fights to impress students while instilling interest in DNA, Tom then sealed his love of human health research during an enlightening Medical Genetics paper in 3rd year.

The most difficult skill Tom had to learn was the statistics program, R, a necessary evil to investigate differences in gene expression data from existing tumours.

Once his MSc was done, Tom planned to get out on his mountain bike more and finally stop being a poor student.

"I would like to work for a few years, and try out the commercial side of the field to see what’s involved there".

Tom, along with his friend Tom, shaved his head in October 2014 to raise funds and awareness for CTCR. 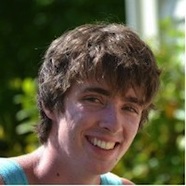