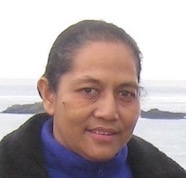 Dr Mercy Ah Siu-Maliko is a Lecturer at Piula Theological College and a Research Affiliate at the Centre for Theology and Public Issues. She is currently lead researcher for the Fola le ta’ui a le Atua: Rolling Out the Mat of Scripture project on church responses to violence against women in Samoa.

She previously co-ordinated the WEAVERS project, The Church and Violence Against Women, for the Women in Theological Education for the South Pacific Association of Theological Schools (2005–2006), and worked at the Centre for Samoa Studies at NUS (2008), and as a librarian and administrator at Piula Theological College (2008–2011).

In 2016 she was a Harold Turner Postdoctoral Research Fellow at the University of Otago, and wrote Christian Faith and Family Violence: A Report for Samoan Communities in New Zealand (2016).