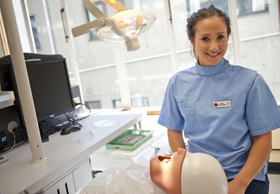 Paris Potaka-Goossens didn’t know what career she wanted when she left school, so she took a couple of years out.

“I admire people who know what they want to do straight from school, but if you don’t, I recommend taking a gap year to explore a few options and find something you’re passionate about,” she says.

After a few months visiting family in Italy, Paris returned home and found work as a dental assistant, which led to her enrolling in Otago’s three-year Bachelor of Oral Health.

“I wanted to learn from the best so I chose Otago for its highly respected international reputation, and because it’s where many of New Zealand’s leading experts in the dental industry are based.

“I felt an Otago degree would give me an advantage when it came to applying for jobs.

“It’s a versatile qualification in high demand, so it’ll give me the freedom to work in any part of New Zealand or Australia, with flexible hours if I have a family one day.

“The course has gone really fast and exceeded my expectations. It helped that I was familiar with the industry, rather than coming straight from school.

“I’ve really enjoyed Dunedin. There’s a great student-friendly atmosphere with so much to get involved in, and I have made some really good friends.

“What I love about the course is that you can do both hygiene and therapy rather than having to choose one or the other. It gives you more options and more variety. When I graduate I’ll look for a job in where I can do both.”

During her career, Paris (Ngāti Tuwharetoa, Ngāi Te Rangi) plans to do some voluntary work overseas in less fortunate countries with limited resources, and work with Mäori health.

“Dental problems are highly prevalent among Māori in New Zealand, so that is an area of particular concern and interest for me that I would like to explore further.”