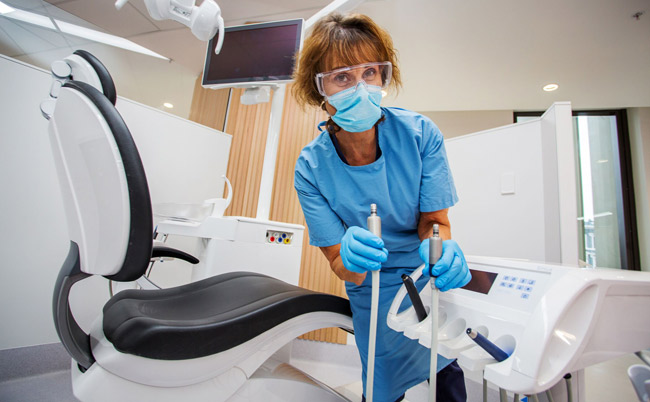 Super-users have just trained on more than 200 dental chairs for patients in New Zealand’s new national dental teaching facility, on the University of Otago’s Dunedin campus.

This is a massive milestone for the building being constructed in Great King Street, which is the first stage of the $130 million dollar two-phase project.

Faculty of Dentistry Professor Alison Rich says the fact the chairs are installed and operational is an exciting milestone because “it demonstrates clearly that we’ll be in our new facility soon”.

Germany-based chair manufacturer DentsplySirona provided high-quality trainers from Germany and Australia to ensure the super-users learn the full capability of the state-of-the-art dental chairs and their associated equipment.

Those super-users will run on-going training sessions with small groups of staff and students to prepare them for occupying the building next month.

Each chair has an integrated computer, which means:

The chairs (Sinius Treatment Centres) are for general dental work on patients along with orthodontics, special care and paediatrics.

Professor Rich says the chairs were chosen and clinics designed with a focus on people – patients, students and staff.

University of Otago Campus Development Division Director David Perry says the chairs fill the entire first, second and third floors of the new Clinical Services Building that is under construction – which is 60 more chairs than previously.

Inside the new building, “general conditions are also so much better – brighter, cleaner, airier, in a well-designed architectural space tailored for dental processes and workflows, with modern-building comforts”, he says.

The chairs, worth millions of dollars, arrived last year from DentsplySirona’s factory in Bensheim, where they were manufactured specially for the University’s Faculty of Dentistry.

Before those chairs started being shipped, a prototype was put in a mock-up of a typical clinic treatment bay to rigorously test whether the set-up would work for staff and students.

“We were building 211 of these, so we had to build one first to make sure they worked,” Mr Perry says.

Each bay needs room for students, supervisors and patients, while every chair has a host of services attached – including power, data, water, drainage, compressed air, dental suction and a central dosing system that cleans internal pipework.

Choosing the chairs involved calling for international tenders that could meet the Faculty of Dentistry’s needs and enable all the services to be connected to New Zealand standards.

The chairs and some radiography equipment filled 20 containers so were kept in a Dunedin warehouse and only transported to the building site when needed, Mr Perry says.

DentsplySirona installed the chairs on behalf of the University, using staff from a local experienced medical engineering company who received factory training from DentsplySirona in Bensheim.

The manufacturer’s technicians from Germany also helped as work ramped up and the chairs started to be commissioned. The German staff were part of DentsplySirona’s special projects team which travels around the world installing chairs for large institutions, he says.

After the building is finished about April/May, the neighbouring Walsh Building’s remaining clinical areas will relocate to the new facility.

Then, the Walsh Building will be refurbished. It will house research laboratories, academic offices, student support, and teaching laboratories.

The two buildings are being linked by an 1800 square metre atrium, which will be ‘the heart’ of the facility, used by patients, students and staff, Mr Perry says.