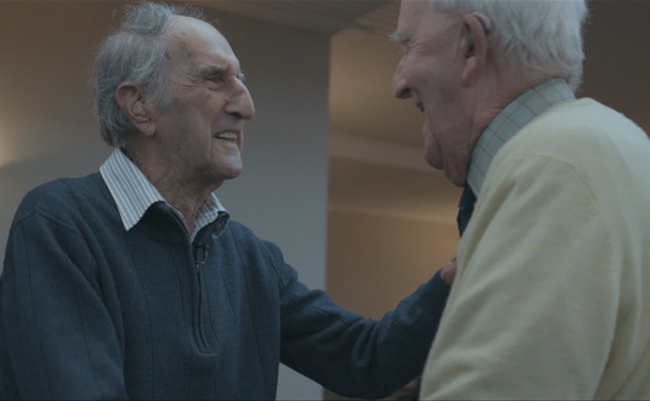 Two Otago dental graduates from the class of 1950 in a scene from a short documentary film The Dental Reunion.

A short documentary film The Dental Reunion, featuring Otago dental graduates from the class of 1950, received its world premiere on 12 June at the Documentary Edge Festival 2020.

"I was struck by the deep friendship of this small group of increasingly frail men, and their ability to have so much fun. I felt that there was a special story that was worth sharing."

The 15-minute film follows the group of dentists, now well into their 90s, as they met in Taupo in 2017. Some of the class trained as dentists after fighting in WWII, and their first reunion was in 1980.

Celia describes it as a “bittersweet”, gentle observational film.

“It celebrates the endurance of friendship amidst the challenges of old age,” she says. “I was struck by the deep friendship of this small group of increasingly frail men, and their ability to have so much fun. I felt that there was a special story that was worth sharing. Plus, there were a lot of dentist jokes.

Michelle says when she was little she wanted to be a dentist.

“So the chance to hang out with some while doing what I love – directing – was fun. I’m really glad dental work has progressed so much since the 1950s!”